In a effort to bring a real issue to light, Hefty created the #SaidNoSchoolEver campaign to raise awareness about the challenges that teachers and public schools face. Over the years, Hefty partnered with Box Tops for Education in which they have donated over 3.5 million dollars to this initiative. This campaign is both culturally relevant and shareable. I love how Hefty is using their platform to raise awareness for a real-time issue. Now everyone go out there and buy some Hefty products to collect those Box Tops!

Recently, Lulelemon launched its new line of athletic wear to cater to men. However, they threw in an usual product to entice men to shop there!

Through trial and error, Lululemon was struggling to expand its company into the menswear sector. Therefore, after much consideration and thought, Lululemon developed its own craft beer this summer to draw in male customers.

However, some of Lululemon’s female customers are upset over this move considering that the company is taking some attention off of them and putting it onto the males. One female customer states on social media, “Not for nothing, but ladies drink beer too, FYI. But maybe they’re not the right size/prototype/muse for this special man brew?”. 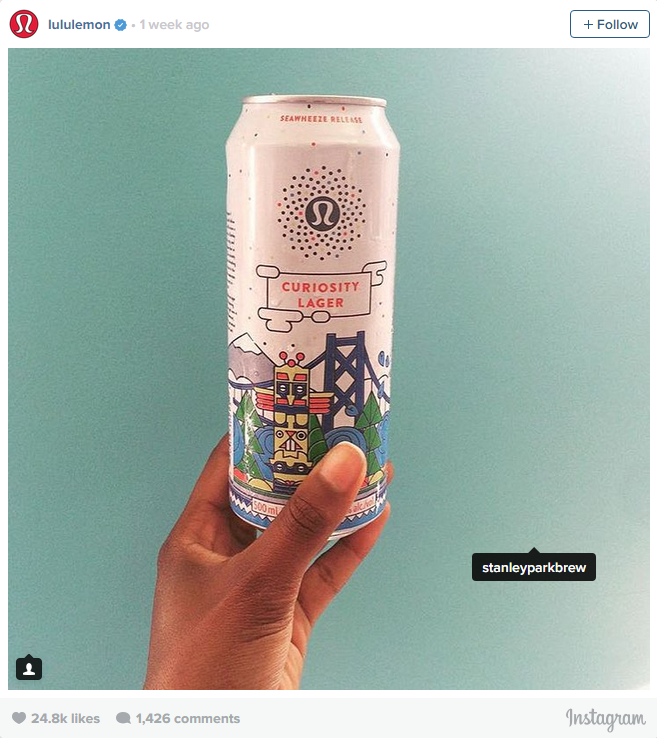 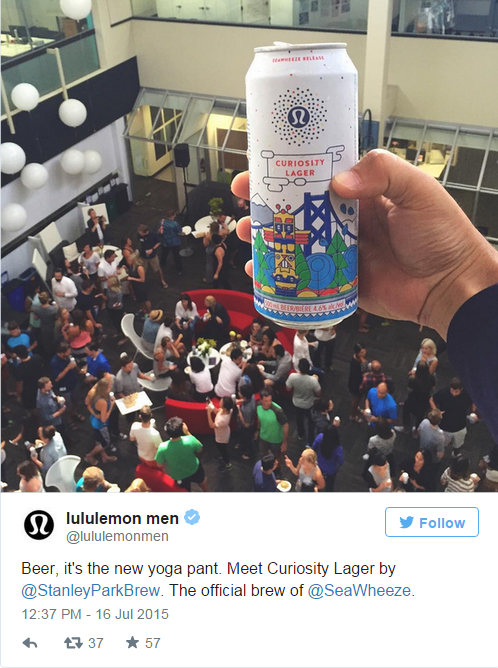 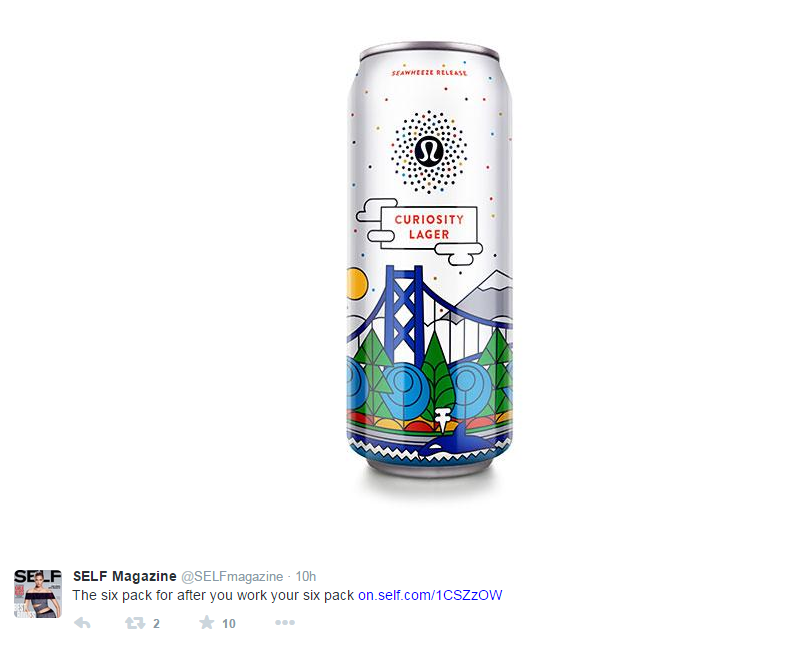 This move was certainly an interesting move for Lululemon but this strategy is helping the company drive buzz and spark many audiences attention. Well played, Lululemon.

The fashion brand unveiled a massive screen designed to show off specially tagged Instagram shots. But it’s not a digital screen—in fact, the “pixels” on this screen are made entirely out of 1.5 inch-wide thread (ribbon is probably a more apt term) that rotate around to create a fabric tableau. F21 Thread Screen goes live July 22 and will run 24 hours a day for a week to support the brand’s back-to-school “Tried and True” campaign (which is all about cherishing your best friend). BFFs around the world are encouraged to tag Instagram photos with #F21ThreadScreen to have their images displayed. The entire thing is being live-streamed, and each image on the screen will be cut into a short video, sent back to the hashtager for them to share.

The mechanics alone are wildly inventive, if not borderline insane—6,400 wooden spools feature rainbow ribbons that spin to change among 36 colors, according to computerized directions, with each spool ultimately serving as a single pixel in an 80-by-80 “pixel” image. Ultimately, the renderings themselves are just shy of hypnotizing, with the shifting palettes creating an iridescent effect as the images morph. ”

We are gauging the initial reaction from our fans,” says Linda Change, VP of merchandising at Forever 21. “[The machine] being so complicated, and requiring a team of people to oversee if 24-hours a day, the current set up allows us to make sure it shines and performs at optimum capacity. After the first few days, we’ll see what kind of response we get and decide the best approach from there.”

“Our goal is to drive social reach [for] this campaign,” Chang adds. “The Thread Screen will naturally drive awareness, but it also shows Forever 21 as a leader in how social networks and technology can be used in completely new ways.”

There is a new social media challenge on the rise to raise awareness for Lyme Disease.

(1) Post either a short video or still photo of the participant biting a lime; (2) Include one or two brief facts about Lyme Disease and co-infections; and (3) Challenge a total of 3 other people to accept the Challenge.

Since the virality of the ALS Ice Bucket Challenge, many organizations have been coming up with fun challenges for fans to partake in order to spread awareness. These types of challenges do not only raise awareness. They tend to build an engaging community… which is, at the end of the day, the ultimate objective in social media!

Organic Valley recently displayed a new video in hopes of its viral potential. Nowadays, it is very common to see organic-related products advertised in straightforward product-centric messages. Especially in commercials like the ones that Whole Foods Market and Wegmans have produced containing a country-side landscape, farmers, happy cows, etc.

It’s is interesting to see Organic Valley take a different approach to attract a greater audience.

Lately, we have been seeing brands tap into PSAs for the satirical aspect. For instance, T-Mobile just launched “Data Stash” with a similar type of campaign. Sarcastic PSAs might just be the latest trend in viral content.

January marked the launch of T-Mobile’s #DataStash campaign, which they kicked off at CES with the #DataStash Dash Contest scavenger hunt. They held another #DataStash Dash Scavenger Hunt this week in Seattle (T-Mobile’s hometown) with a grand prize package to the Super Bowl.

The biggest buzz worthy moment happened this week when Kim Kardashian teased her T-Mobile Super Bowl commercial that supports the campaign, which of course leaked online. You can watch Kim being Kim below. #KimsDataStash

Why It’s Hot:
This demonstrates a well-orchestrated integrated campaign that consistently introduces new elements to keep it interesting and keep the buzz alive.

According to NBC News,TD Bank Canada decided to do something to thank their loyal customers who have stayed with them for many years. They turned their ATM machine into an “Automated Thanking Machine.” Instead of customers withdrawing money from the bank, the bank gave the customers money along with other assorted gifts. The gifts came out of various compartments of the ATM machine that were added specifically for this occasion. In order to promote this campaign, TD Bank utilized the hashtag #TDThanksYou. This was just their way of giving thanks to their customers who have been so loyal to them over the years since they don’t get thanked enough. It was an unexpected refreshing gesture.

This is a great way to make consumers feel as though what they do is appreciated. Many brands simply shove advertisements down consumers’ throats and then wonder why their sales aren’t increasing. A big reason is because consumers don’t feel the need to invest in a brand that doesn’t even seem to genuinely care for their consumers. I think a social campaign like this could really help our consumers feel appreciated. It makes the consumer experience much more personal and taps into their emotions. At the end of the day, we’re all people who want to be cared for. Simple gestures like this could go a long way. I think TD Bank did something very smart here in thanking their customers. I’m sure their customers will continue to stay loyal to them after this grand gesture.