In 2016, Guillermo Robles, a visually impaired man, sued Domino’s Pizza because their website and app were not compatible with screen-reading software, making online delivery impossible. Robles’s lawyers argued that this violated the American Disability Act (ADA), which requires that “places of public accommodation” be accessible. After the case was initially dismissed by a district court because of a lack of Justice Department guidelines, a federal appeals court ruled in Robles’s favor.

Now Domino’s is appealing the decision, asking the Supreme Court to decide that it does not have a legal obligation to follow the ADA online. The case pits a company defined by delivery against the very customers who need it most.

At stake is the future of user experience. If courts decide that the American Disability Act extends to the internet, then designers may be legally required to accommodate all users on all projects that accommodate the public.

The IAB expects podcast advertising to exceed $500 million in 2019, which represents growth of about 65% in just two years. It’s a fast growing medium with limited standardization where only a small handful of categories have had ongoing success.

Part of podcasts’ allure (to brands) is the quality of its core demographics, which skew ages 25 to 40 with higher income levels and education. This is often an audience that’s tough to reach and they’re not typically watching a lot of TV.

The other allure is credibility. Most listeners are highly engaged when tuned into a podcast and usually don’t mind hearing ads. Ads tend to be kept to a minimum and are relevant to the program’s content, often via host-read ads. Trust and brand recall for podcast ads is also high when compared with other ad formats.

Based on data from nearly 50 custom studies Nielsen has conducted over the last 18 months, podcast advertising has demonstrated that it can move the needle on many important key metrics like awareness, ad recall, affinity, recommendation and purchase intent.

The podcast advertising market in the US is poised for strong continued growth in listenership and ad dollars, but without meaningfully addressing current friction points, it might remain a niche advertising vehicle primarily suited to direct-response advertisers in the near term.

The ability for sellers and buyers to talk the same language is holding back the value proposition for brands more than anything else. There is a question of scale and fragmentation still – with only a few programs reaching the masses and many more reaching only smaller, niche audiences at far less frequent intervals than other media.

Newspapers existed before the Audit Bureau of Circulation, Radio existed before Arbitron, TV existed before Nielsen and the internet existed well before the IAB and comScore.  Podcasts are still living in this dawn of pre-standardization and governance, and how downloads and audience size is measured from one show or network to another is varied, making it harder for larger brands to execute – and measure – any meaningful effort.  Anyone want to start up an independent 3rd-party measurement company? 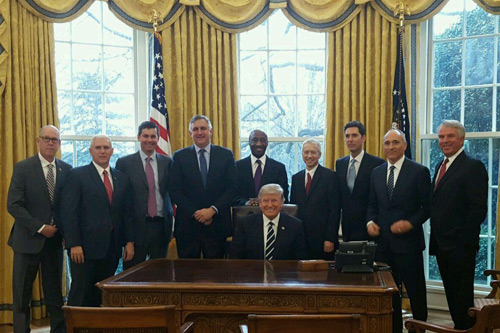 Pharma executives got their wish for an early meeting with President Trump Tuesday, 1/31, a couple of weeks after he accused the industry of “getting away with murder” on drug pricing.

“We have to get prices down for a lot of reasons. We have no choice,” Trump told the pharma pack, which included Pharmaceutical Research and Manufacturers of America (PhRMA) CEO Stephen Ubl, and the head of Novartis, Merck & Co, Eli Lilly, and Celgene.

Too many pharma companies are making medicines overseas – which he blamed on regulation, and overseas “money supply and devaluation”.  Also in Trump’s sights is what he described as “global freeloading” – foreign price controls on drugs that reduce the resources of US pharma companies for R&D. Other countries should “pay their fair share for US-manufactured drugs”, he asserted.

Trump counterbalanced the tough talk by reiterating his pledge to reform the regulatory process so that new medicines can be approved much more quickly, and changing the circumstances in which experimental drugs can be used in patients. In particular, he said it should be easier to test new drugs in terminal patients.

The promise of looser regulation may appear to play to the pharma companies, but in reality the industry has been alarmed by the initial moves in this area – including an executive order this week that calls for federal agencies to withdraw two regulations for every new regulation they introduce.

Adding that to a second order implementing a federal hiring freeze – and a lack of detail in both cases – and serious questions are being raised about the ability of the FDA to function effectively. In particular, there is concern that the orders could effectively stop the 21st Century Cures Act – one of the last actions of the Obama administration and widely welcomed by industry – in its tracks.  This Act will help to quicken getting new

Trump is making changes quickly… and this could effect our pharma clients and in turn, us.  While lowering the prices of drugs could be a great step in the right direction for consumers (more people would have access to the drugs they need), this could in turn mean a significant loss of profits for pharma companies (though, the volume they could make up may balance things).  Less profits=less advertising dollars (but that’s ok).

We should all just be aware of the looser regulations- depending on how this goes and what gets cut, this could potentially mean that there could be less safety requirements to get a drug passed, which is kind of scary!  We need to be informed about what we put into our bodies.