Pandora announced that it will release its new Podcast Analytics feature today, providing podcast hosts with audience information including: where they live, how long they listen, and how they engage with content.

In doing so Pandora is joining competitors Apple and Spotify in providing analytics dashboards to its content producers in a bid to keep them using the platform and help keep listeners engaged. 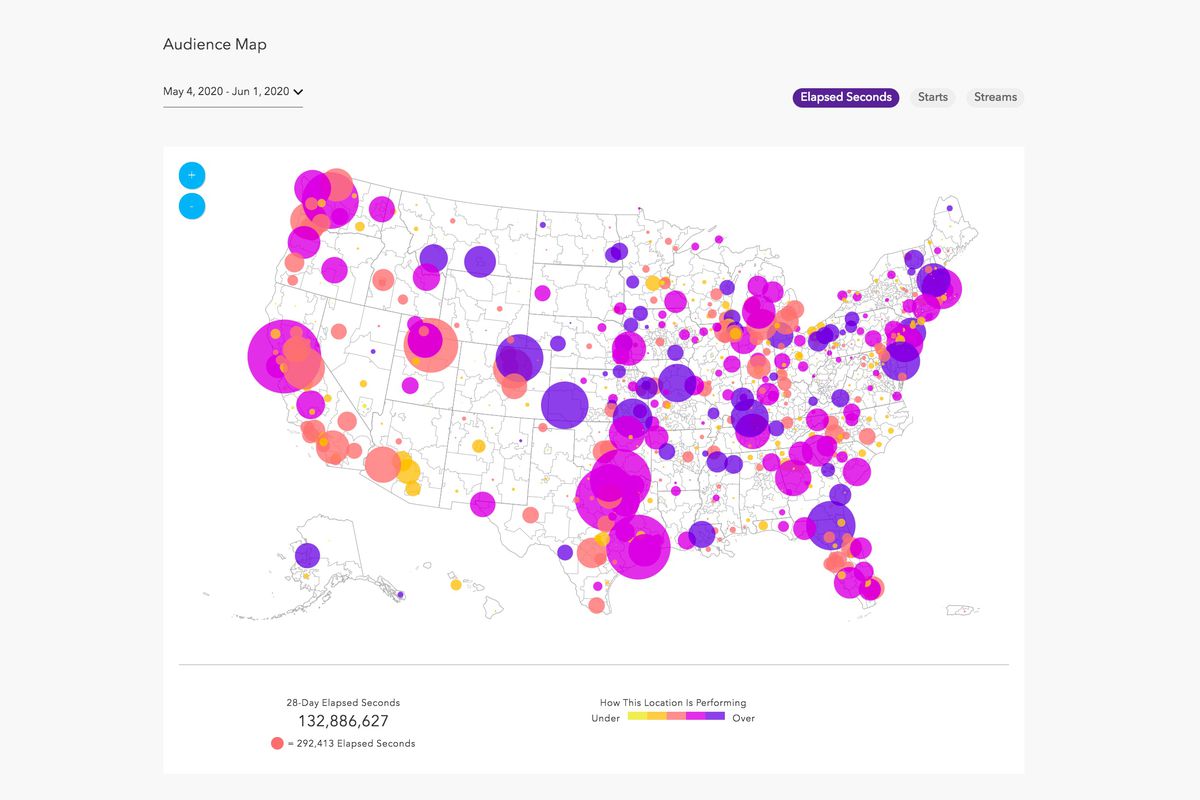 Until recently only professional content producers had data into how their content was being purchased, used, and by who–e.g they needed a marketing team to do research. This could impact creative decisions as they chased trends and customers. Now, customer data can continually impact the creative process for non-professional creators. By providing clear KPIs, these tools could shift the type of content that is made. 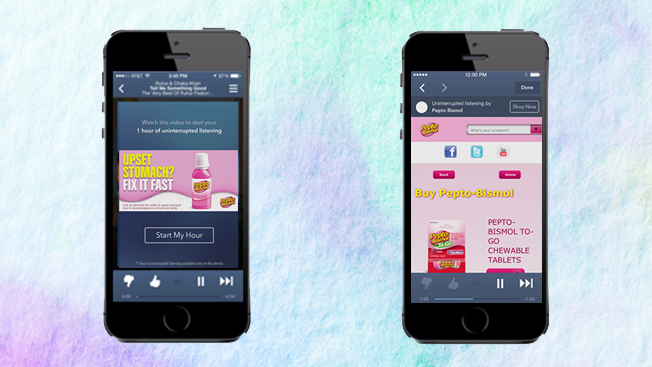 Late last year, Pandora rolled out Sponsored Listening, an ad format that lets consumers listen to one hour of ad-free music in exchange for watching a short video promo. Bud Light, Fox and Sony PlayStation have all tested the format since then.

Currently, those pre-roll videos are at least 15 seconds and can run up to two-and-a-half minutes. But it’s no surprise that getting people to pay attention for even 15 seconds is tough, causing Trimble to make the case for eight-second preroll. The idea is that an eight-second ad is a nice balance between the length of a six-second Vine and a 10-second video.

“As the competition for consumers’ attention heats up, we’re focused on developing ad products that are good for both advertisers and listeners—Sponsored Listening is a great example of that,” Trimble said. “Our video advertising product has performed well thus far, and we are exploring various video formats on an ongoing basis. Looking ahead, I could envision video and audio ads as short as eight seconds being something advertisers and listeners will be interested in.”

Pandora said it doesn’t have any immediate plans to start selling eight-second video or audio ads, but is considering it as a way to better target millennials and younger consumers.

Greg Manago, creative development and production lead for Mindshare’s content and entertainment division, said he liked the idea of eight-second video as an alternative to Vine’s six seconds. “It gives us another two seconds to work with,” he said. “The trick with mobile is to be engaging quickly without being annoying. You need to be very creative at this length, but we love a good challenge.”

Getting brands on board
Steve Carbone, managing director and head of digital and analytics at Mediacom agreed that snackable clips are needed on mobile, since some video ads are still sold as 30-second spots. He said that when consumers have a choice, they skip 50 percent of those longer ads halfway through.

That said, an eight-second cap could be a tough sell for brands that have already struggled to turn traditional 60- and 30-second ads—which they spent decades perfecting for TV—into shorter digital promos.

Plus, the growing fragmentation in how media companies sell video ads could make the eight-second video just one more headache for media buyers. Just last week, eMarketer cited more video options as a challenge that may hold back mobile spending. The research firm expects mobile video advertising to hit $2.6 billion this year.

“Most brands will struggle to tell a story in eight seconds, as they still think in a TV world,” Carbone explained. “Eight seconds requires a different level of creativity and a huge shift in how you need to get your message out.”

As we continue to create and share video our struggle is how do we get the audience to watch the whole video?  Even 15 seconds is starting to feel too long with an audience suffering from content overload and short attention spans.  Today as marketers we have to deliver a compelling message in as little time as possible.  So what do you think the sweet spot of mobile video is?  Pandora thinks its 8.

On Monday afternoon, celebs such as Jay-Z, Kanye West, Madonna, Rhianna, Chris Martin and Nikki Minaj (just to name a few) gathered to announce the re-launch of TIDAL, a music streaming service. TIDAL is a high-definition streaming service that will compete with services such as Pandora and Spotify. Jay-Z is the majority owner while the other artists on stage all have small stakes in the company as well.

Unlike other music streaming services, there is no free tier for subscription. Therefore, we can assume there will be no disruptive ads on the platform as we see with other free streaming memberships, however this has not yet been confirmed. For TIDAL, users will have to pay $10/month or $20/month depending on the quality of music they prefer. Additionally, the player is available as both a website and an app (no desktop player) and can stream to a number of speaker systems. An added bonus – Tidal will offer the ability to save songs for listening without an Internet connection.

Another edge that TIDAL may have is the releasing of exclusive content and invitation to special events for paying members.

With the domination of streaming services such as Pandora and Spotify, we haven’t seen a potential game changer enter the market in a long time. The switch of focus from price to quality enables the brand to position itself as premium and perhaps not truly in competition with any other services. Next, having people with star power backing this service is major. For example, celebs that have had constant battles with streaming services may actually volunteer to have their music on Tidal. If this is true, we could see both artists that are stakeholders in Tidal or support its mission, releasing exclusive content (perhaps even entire albums) on the service. If Tidal can convince artists to do this, they could gain a huge advantage over competitors. 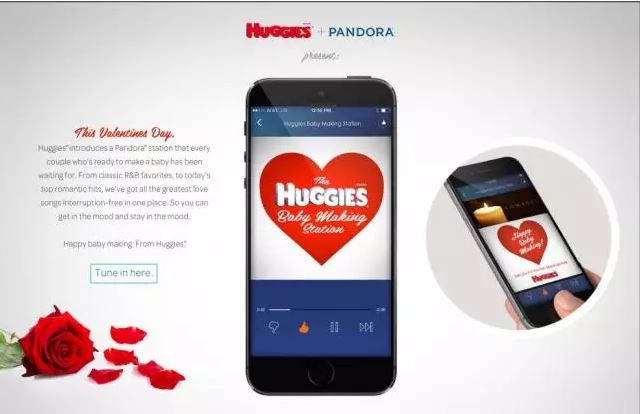 For Valentine’s Day, Huggies created a Huggies Baby-Making Station on Pandora for, playing tunes aimed at getting couples in the mood.

Think of it as a digital-age millennial version of the old make-out tape, replete with entries from Barry White and heavy on other R&B classics, including Stevie Wonder’s “My Cherie Amour.”

“I’ve been working on Huggies for five years, and one thing we’re always dealing with, project after project, year after year, is the declining birth rate,” said Chris Turner, group creative director at Ogilvy, Chicago. “Lately, we’ve been thinking about Valentine’s Day as an agile opportunity, and we kind of put the two together.”

“At Huggies, babies are always on our mind,” said K-C spokesman Bob Brand. “The partnership with Pandora is a fun-loving way to engage Huggies couples in the romantic spirit of Valentine’s Day.”

The Huggies station will play without commercial interruption on Pandora for at least a month, backed by ads on other Pandora stations and by social-media efforts through the brand’s accounts, Mr. Turner said.

It’s interesting to see how brands are using Pandora for marketing, other than the banner and :15 spot. I think this is a creative approach to a brand awareness initiative, but I have to wonder what kind of return they expect to see.

Check into most hotel rooms today and your TV viewing choices consist of local channels and standard cable fare such as the Weather Channel, Discovery, USA, etc.  But none of the streaming networks that you can’t get with ordinary cable are available  So no Netflix, Hulu, or Amazon.

That’s about to change.  In a nod to the future and the rapid growth of streaming Internet content (video and music), Marriott Hotels is offering Netflix, Hulu and Pandora to their guests via their in-room high-def TVs as part of a test. As Bloomberg reported, Marriott spokesperson John Wolf said “We have invited leading technology companies and content providers to work with us to design the next wave in in-room entertainment focusing on on-demand programming. We are currently offering guests in eight test hotels the opportunity to stream their content through our high-definition TVs whether it is Netflix, Hulu or Pandora.”

Marriott is currently considering payment options — possibly as part of a premium Internet package or as a separate charge to stream each network — one for Netflix, one for Hulu, etc. For now, Marriott is allowing guests in test locations to log in through their own subscription accounts for streaming content, as noted by this Twitter post.

Wow. I’m impressed. The Marriott TV system they have here allows you to log into Netflix, Hulu, etc for free with your own account.