We are all familiar with McDonald’s ‘Pay With Lovin’ campaign, having discussed it in Hot Sauce, prior to its SuperBowl debut. Now, independent brand monitors have shared results: an increase in WOM & purchase intent, w/little movement in favorability (sentiment was and is neutral). 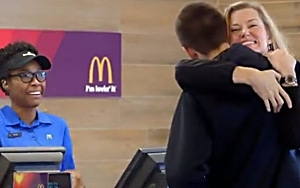 – WOM saw a five percentage-point bump, with 29% of adults 18 and over reporting that they had talked about McDonald’s with friends and family over the past two weeks, compared to 24% just prior to the campaign launch.

– On game day, 36% of adults said they would consider making their next fast food purchase at McDonald’s; 11 days later, 39% said the same. One possible reason for the increase: people hoping to be chosen randomly for a free meal or watch others asked to perform a task, says YouGov.

Why It’s Hot: You might say the campaign is gimmicky, but it is fresh and new and kind of sweet…and, it worked. A 20% lift in WOM and 8% lift in PI are major accomplishments, especially for a brand that has such a huge volume base. This isn’t just reinforcing the idea that brand marketing should “be good”, but should “do good” (in this case, asking people to hug each other)!