KFC is temporarily dropping the ‘It’s finger lickin’ good’ slogan it has used in its advertising for 64 years and launching its first global campaign in response to the coronavirus pandemic.

A campaign launching today (24 August), created by agency Mother, shows various images of KFC– including an outdoor ad and a number of shots of its infamous bucket of chicken – with the ‘finger lickin’’ part of its slogan pixelated out. It ends with the line: “That thing we always say? Ignore it. For now.”

The campaign will run across TV, press, social media and digital. Outdoor ads will feature KFC buckets with disclaimers, saying things like: “Lick fingers at own risk.”

KFC UK and Ireland’s head of retail and advertising, Kate Wall, tells Marketing Week: “We’ve been using that slogan for over 64 years and it’s arguably one of the most famous in the world – for a reason, we know our guests always lick the crumbs off their fingers because the chicken is so delicious.

“This year has thrown everyone – all brands – and we took a bit of a global stance that actually right now our slogan is probably the most inappropriate slogan out there, so we need to stop saying it.”

The decision to both drop the slogan and run a global campaign was prompted by the insight that encouraging finger licking was “inappriopriate” in the middle of a pandemic.

Not This premise is a bit of a stretch considering licking your fingers is not a vector of transmission, and it’s a little condescending to the public, as in, did anyone really need this message from KFC? Brands want credit for seeming to care about the world and its people, and sometimes the ways they go about eliciting this credit is tone deaf or just off the mark.

Hot Removing part of the tagline does encourage the million+ viewers on Youtube alone to try to remember it, which further instills their slogan in their minds, so that part is clever.

Due to a change in KFC’s supply chain in the UK, the fast food giant recently ran out of chickens in the UK….which is really bad if the entire business model relies on chickens.

Some Brittons have lost their ever-loving stuff and one woman’s whine about “having to go to Burger King” went viral. See below:

But the fiasco gave KFC an opportunity to turn a negative into a positive. The food chain ran an apology ad in the paper with the letters on the bucket spelling FCK instead of KFC.

It’s hot because they were able to use humor instead of some stock pr apology, though it might take the woman in the viral video a bit longer to get over it.

A 30-second version of the ad from Wieden + Kennedy in Portland will air during Sunday’s Grammy Awards broadcast on CBS. McEntire replaces the noncelebrity Colonel Sanders.

“[The creative team] wrote everything, the script and the music,” McEntire told Adweek. “I thought they did a wonderful job on it all. We had fun with it. I’d go in and sing it my way and they’d laugh and say for me to do it this way, and we’d all laugh.”

McEntire said she was “spellbound” in December when she was asked to be the first woman and first musician Colonel Sanders and that she enjoyed the way she was able to “portray what I do for a living as the Colonel.”

“With Reba’s southern roots and entrepreneurial spirit, she truly embodies the values of the Colonel and the crowd-pleasing flavor of our Smoky Mountain BBQ,” said Andrea Zahumensky, CMO, KFC U.S., in a statement.

The new flavor will be available at participating KFC locations on Jan. 29.

McEntire said it was hard at first to sing while wearing the costume, goatee and mustache.

“It took a while to get used to it because when they put it on me, it was glued on my upper lip, and then when you smile, that stretches out,” she said. “So we kept gluing it back on.”

She continued: “I got a big kick out of the transformation and wearing the wig. The hardest part was when they said to me, ‘We want you to eat this piece of chicken while you’re the Colonel,’ and I looked at them and I looked at the band and they had mustaches and I said, ‘How do y’all eat with the mustache?’”

McEntire is in four spots for KFC, with the potential for a fifth appearance, according to a rep for the brand. McEntire noted that it “would thrill me to pieces to continue it on.”

Why its hot: THIS IS A BRAND TO WATCH! They are constantly keeping fans on their toes, waiting to see what they will come up with next. This stands out from the crowd b/c they broke away from the tradition of having a male colonel since they were founded and for the first time have a female spokesperson. With inclusion and diversity being a hot topic constantly on the minds of consumers, this proves how as advertisers we have to be in tune with the world going on around a brand to breakthrough and grab attention. Cultural and social cues have so much to do with the messages brands are putting out.

KFC has turned its box o’ chicken into a drone, which it is calling a KFO — Kentucky Flying Object. The promotion is in celebration of the new smokey grilled wings.

The clever packaging is only available in India today and tomorrow.

The drone is controlled via an app available on iPhone or Android. 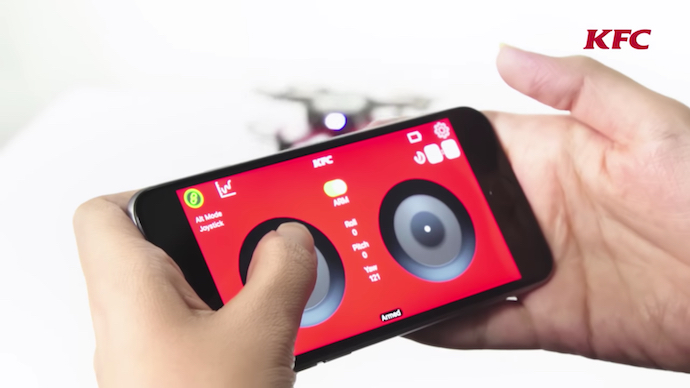 Why it’s Hot
KFC has been known to periodically release these types of interactive, tongue in cheek promotional items. Anything to distract customers from the taste of the “food.”

KFC pulled a successful social media stunt by following 11 people on its Twitter account that hinted at the company’s secret recipe of 11 spices and herbs. Accounts that KFC follows are all of the Spice Girls and 6 people named Herb. 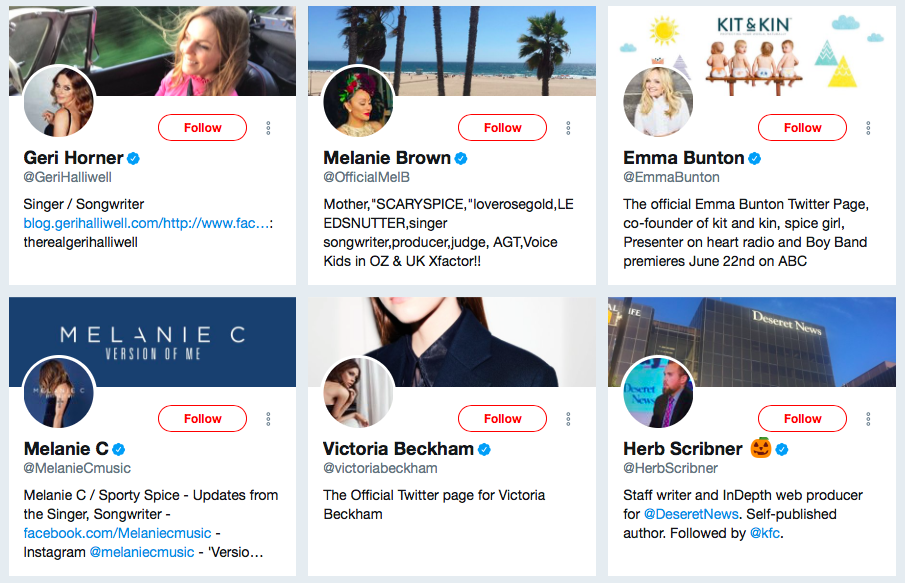 Why it’s not hot: KFC doesn’t seem to have immediate next steps to amplify the effect.

The animatronic uses speech recognition, artificial intelligence technology and text-to-speech techniques to repeat whatever the drive-thru operator speaks so customers can have unique and interactive conversations with the “real Colonel Sanders”.

In short, it’s a megaphone disguised as a Colonel Sanders head. A very cool one.

KFC is rolling out a high-tech chicken bucket to celebrate its 60th anniversary in Canada. The “Memories Bucket” is a chicken bucket that doubles as a Bluetooth photo printer, which connects to your phone wirelessly to print pictures. As the bucket states, all you have to do is “Snap. Select. Send. Share.” KFC’s Facebook account indicates the company will be giving “a few” of these special buckets away, so for now it doesn’t look like they will see a wide release. KFC bills it as a way to capture the family memories you make while sharing its chicken.

Why It’s Hot or Not?

Fast-food meets technology gimmicks are all the rage at the moment. Pizza Hut Hong Kong turned a pizza box into a working movie projector for your smartphone. (Both Pizza Hut and KFC are owned by Yum! Brands.) In Germany, KFC introduced the Tray Typers – a Bluetooth keyboard installed into food trays, which sync with customers’ smartphones and tablets. Now you can type without getting your phone greasy! Not sure we need to see pictures of our friends happily eating greasy drumsticks, but the creative merging of technology and packaging is innovative.

KFC might be Finger Lickin’ Good but those fingers after grabbing a drumstick and some fries are good for no screen.

Good thing KFC has come up with a solution for protecting smartphone screens from the secret ingredients in the famous fried chicken. The KFC Type Tray allows you to eat all the fried chicken your heart desires while answering emails, notifications, and updating your social media about how cool the new gadget is.

This slick reusable and rechargeable keyboard was launched in Germany and connects to a phone via Bluetooth. Although fully branded with KFC on every crevice, these keyboards were so popular that each one handed out during the promotion was swiped home.

Although inarguably very cool, do we really need another reason to not talk to each other over lunch and only look at our screens? It’s a great idea in concept to be given one of these with an order of fried chicken, bringing a new level of tech into the fast paced world of fast food, but it also brings up some potential questions. Like, how do you switch mobile apps without touching the phone? Why can’t you just not look at your phone for half an hour? Did napkins disappear as new technology appears – can’t you just wipe your hands and then touch your phone? Things to consider.

Colonel Sanders needs a little help with the Twitter.

The KFC colonel, who was recently revived as the chain’s advertising star, took over its feed Wednesday afternoon, saying he was excited to offer some “clear and concise communication” directly to the brand’s fans. Some 18 tweets later, it’s clear he needs to work on the concise part.

Along the way, though, he did manage to quote his own business philosophy, called “The Hard Way,” in its entirety. And indeed, this is the hard way to do Twitter—but maybe it will pay off in the long run.

See the tweets below. 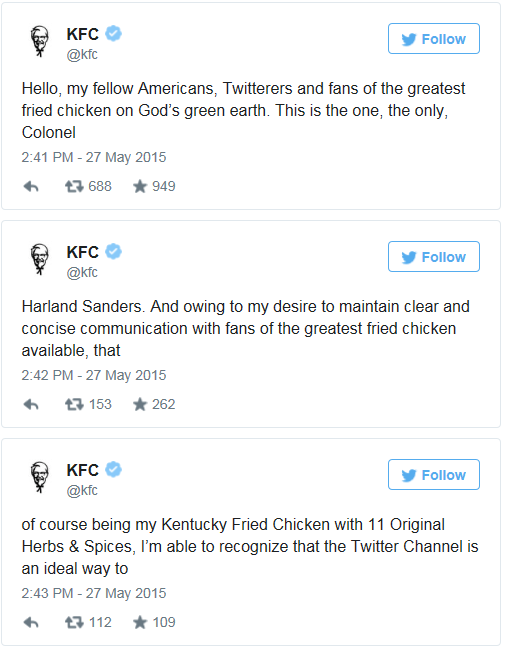 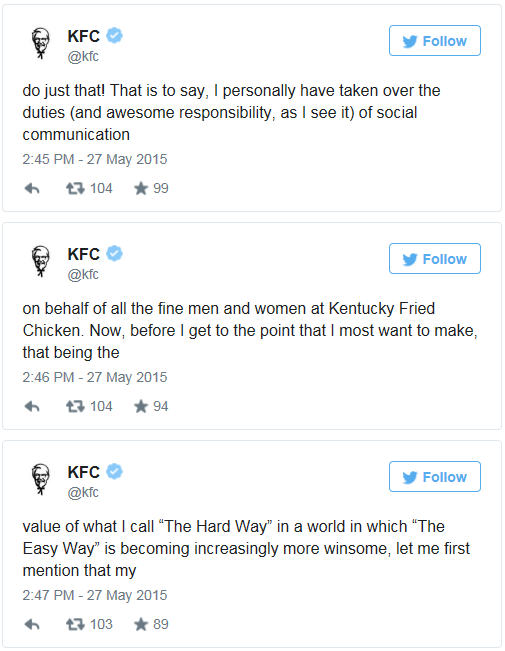 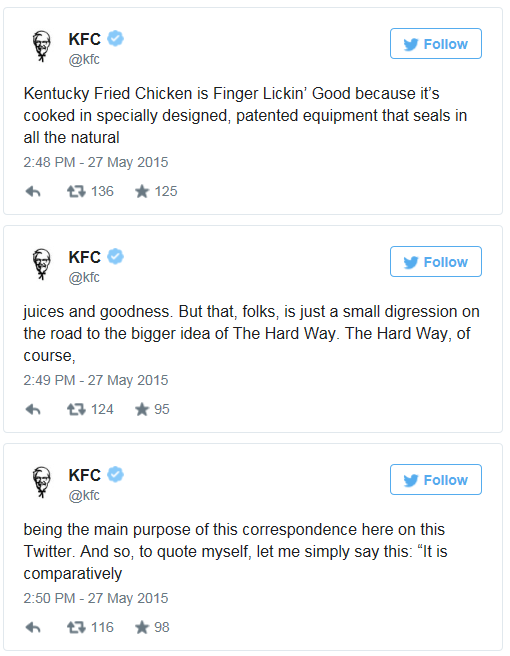 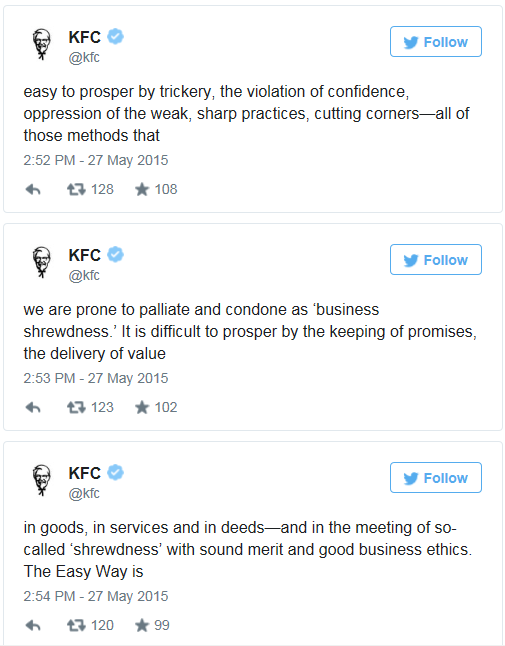 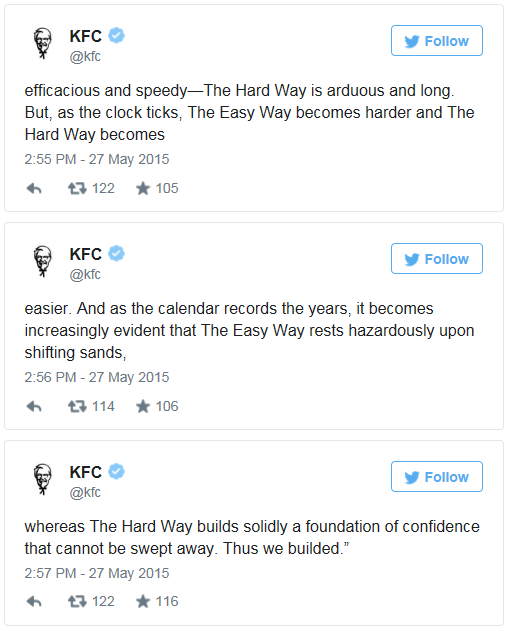 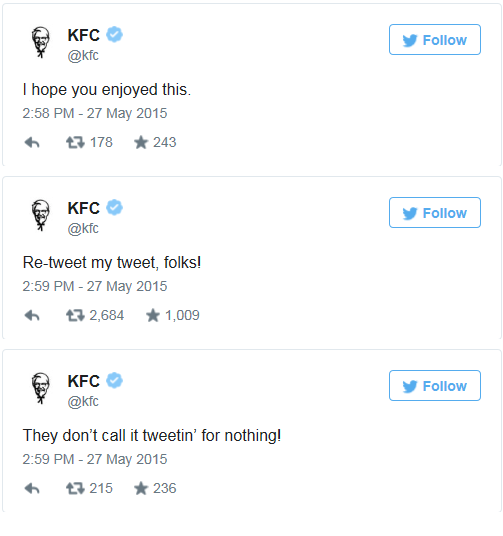 This is a creative use of the channel.  It goes against everything we are told about how to use Twitter, but it worked for KFC.  The brand leveraged its equity and told their story in a unique way that got the attention of the Twitter-sphere.  It all goes back to understanding your brand and doing what works even if it goes against the ‘norm’.

A creative from Kentucky’s Cornett is taking a new spin on one popular Kentucky creation by teaming with local artisans to produce a unique line of jewelry. The new invention consists of actual Kentucky Fried Chicken bones dipped into 14kt gold and strung onto necklaces. So far, a limited 20 “Gold Kentucky Fried Chicken Wang Bone Necklaces” have been released since the campaign began.

The campaign was created independently of KFC but the brand is embracing it, using the hashtag #Chickenistas.

Read more about the campaign and chicken-bone-turned-jewelry process on the agency’s site here and check out the video below.

Why It’s Hot:  Brands are welcoming independent entitles using their products for completely different, new purposes. In the future, KFC and perhaps other food companies might start selling bones and other products to artisans as a new way to raise profits and build more buzz around the brand. More chicken for everyone! Sorry, vegetarians.