Addidas just announced “GMR” – a digital insole that connects to FIFA Mobile. So, when people play football in real life, it scores them points in the game.

Clearly at least part of the appeal of games like FIFA is to feel like you’re truly making moves and scoring. What’s even better is to be able to be the one making those moves and scoring, but getting digital points for it. It’s an interesting example of the digital transformation of physical things around us, especially with all the talk about e-Sports being a big part of sporting future.

Barbie has had a very trans-formative year already and they are just getting started! Not only did the brand reveal its three new body types, seven new skin tones, 22 eye colors and 24 hairstyles to appeal to a wider audience, now the brand is targeting “Dads” throughout their campaign messaging #DadsWhoPlayBarbie.

In order to set the stage for this new campaign, Barbie made its campaign debut during the NFL’s AFC Championship game on January 22 showing how that although Sundays are dedicated to football for a lot of American fathers, they will always find tome for their daughters to make moments that matter.

CBS is increasing the amount of college and pro football it plans to stream across digital platforms for the upcoming season.

The broadcaster has rights to two marquee sports properties in the U.S.: SEC college football and the NFL. In the coming year, CBS will live stream its entire “SEC on CBS” schedule, which features one game per week, on CBSSports.com and the CBS Sports mobile app. For its NFL coverage, the network plans to stream two regular-season games for the first time ever, plus every playoff game it has broadcast rights to — including Super Bowl 50 — on CBSSports.com and across its connected TV apps on Apple TV, Xbox One, Chromecast and Roku.

“Our goal is to provide the best viewing experience possible for fans,” said Jeffrey Gerttula, SVP and GM of CBS Sports Digital. “We look at every sport — all of the rights we have — and we make a decision [on how to provide coverage across platforms] based on what’s best for the consumer and best for our business.”

Right now, this means making certain full games available for free across platforms, without requiring users to authenticate — meaning that people who don’t pay for CBS via cable or satellite TV can also watch these games.

But the company’s coverage plans go beyond the live streams.

With its new “SEC Live” portal on CBSSports.com and mobile apps, CBS plans to provide additional content and features to augment the live stream. This includes original pregame, halftime and postgame shows for each game, featuring CBS Sports talent like Gary Danielson, Brady Quinn, Teryn Schaefer and Matthew Coca. For the halftime show, CBS Sports has secured sponsorship deals with Sonic (for a segment highlighting fans on both sides of the matchup), Microsoft (for the segment breaking down the stats from the first half) and Dr Pepper (for a segment featuring fans sharing their “one-of-a-kind” traditions).

Other SEC Live features include what CBS calls its “all-22” camera angle to give viewers an overhead view of all 22 players on the football field; game highlights so viewers can relive a big moment or catch up on what they might have missed; quick reactions from CBS talent on the latest; and additional commentary via Twitter.

The decision by CBS to increase its streaming plans for the coming football season can be partially attributed to the fact that people are watching more video content on its digital platforms. According to comScore, CBSSports.com had 2.9 million unique desktop viewers and 39.9 million video views in the U.S. in July.

The idea is to build viewership across mobile and connected TV by experimenting with different types of content, including live sports.

This is a huge move for CBS, even though it’s a test.  They are seeing the value in (almost) disregarding the paying cable customers and realizing that there’s tremendous value in providing great content online.  In my mind, this is another step in the direction of cord cutting.  If networks begin to realize that their audience is becoming more valuable outside of just linear TV, they’re going to go where the people are, vs. limiting them on the linear TV space.

Last night, during the Ravens vs. Steelers game, Lowe’s released a new NFL campaign themed “Make your football self happy.”

Four hilarious spots show men and women being urged by their inner football aficionado selves to get their home improvement projects done, so they’ll be free to watch football on Sunday. The best of the bunch shows a woman scolding herself to get her gardening done in time for kickoff. See below.

For most, the weekend is a time for men and women alike to catch up on those pesky projects they’ve put off throughout the work week. Lowe’s capitalizes on this, realizing that a huge chuck of its sales happens on weekends.

Not only that, these ads are extremely topical as football has officially kicked off. Of course, it’ll be interesting to see how people react to these ads, where men and women berate themselves, considering the recent release of a video showing Ray Rice physically abusing his now wife.

All in all, these ads are fun and truly lend themselves to the nature of football as a whole. Football fans are dedicated and these ads bring that feeling to life.

For years now, after a player takes a hard hit to the head, a coach or trainer examines him to check the severity of the impact and his readiness to return to the field. But a visual inspection only reveals so much.

Now there is a wave of new technology, embedded in football helmets, aims to measure the force of on-field collisions and send alerts when a player’s health may be in danger. 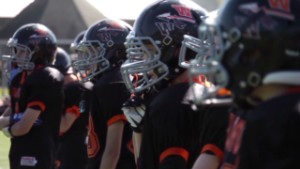 Why it’s hot?
Having theses concussion helmet sensors is a great way to help keep players healthy. Head injuries in football have become a hot-button issue in recent years, from youth leagues to the NFL. Thousands of former pro players who have suffered brain disorders, like dementia, Alzheimer’s disease, Parkinson’s disease have sued the NFL, claiming the league knew about the long-term health risks associated with head trauma.

Seeing an opportunity, manufacturers are producing a growing list of products marketed as “head impact sensors,” small devices that fit inside the helmet and trigger a warning when a player sustains an especially hard blow. These products have names like Shockbox Battle Sports’ Impact Indicator and Reebok’s CheckLight.

Now Riddell is looking to incorporate such sensors into the helmet itself. The company’s newest helmet, the SpeedFlex, is the first designed from the ground up to include a polymer-film lining that develops a charge when impact pressure is applied.

The helmet’s crown contains a flexible panel that compresses upon impact, reducing the force of collisions. Meanwhile, the helmet can be fitted with sensors — Riddell’s InSite system, launched last year — that send wireless alerts to handheld devices on the sidelines, telling coaches when a player has sustained an unusually forceful hit, or series of hits, to the head.

A Riddell spokeswoman said the SpeedFlex helmet will hit the market this summer in time for the 2014 football season.

Riddell and other manufacturers are quick to point out that their products don’t diagnose concussions or any other injury. They say their devices do give coaches and trainers additional criteria that can help in determining whether a player should come out of a game. The helmet is intended to help identify players that are striking their head too often. If coaches see this happen, they can warn the player of a possible concussion. This is important because at the end it can protect them and make the game safer.