Who doesn’t love Dorito’s? Nacho, Cool Ranch, Flamin’ Hot, whatever you fancy, they’re a classic and delicious snack. But for as long as they have existed, eating them has come at a price – Dorito’s fingers, the unshakeable film of Dorito’s dust that ends up all over everything you touch unless you clean your hands after each chip.

But your clothes, furniture, pets, and gaming controllers no longer have to live in fear, for the Dorito’s Towel Bag is here, giving Dorito’s lovers a way to clean their hands while eating their favorite snack.

It’s a beautiful example of a brand embracing its essence, while improving its experience. Dorito’s dust is part of what makes Dorito’s the chip they are. But instead of eliminating it and changing the product, they created a new one to embrace their product’s dark side.

If you thought Target’s haters were bad following the retailer’s move to gender-neutral labeling, have a look at all the anti-gay critics swarming Doritos’ Facebook page this week after the rollout of its LGBT-pride rainbow chips.

Who better to take them down a notch than Mike Melgaard, the guy who hilariously posed as a Target customer-service rep last month—and has now done the same on the Doritos Facebook page—to make epic, sarcastic replies to critics.

Here are a few of his gems while posting as Doritos ForHelp: 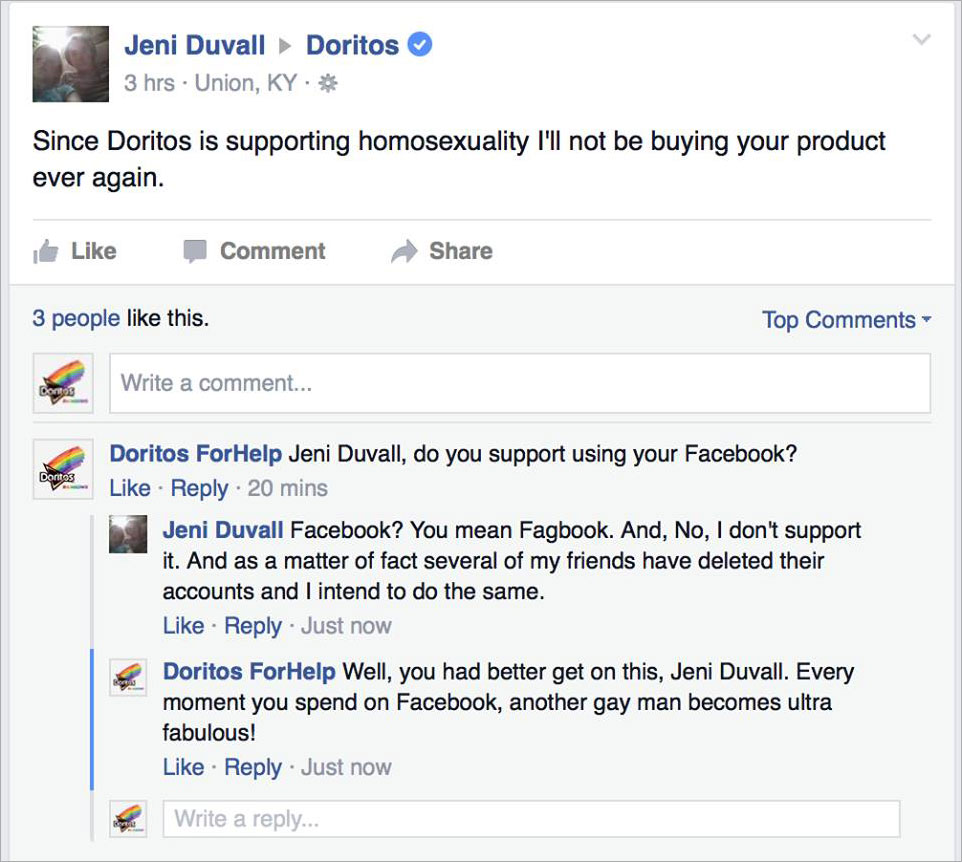 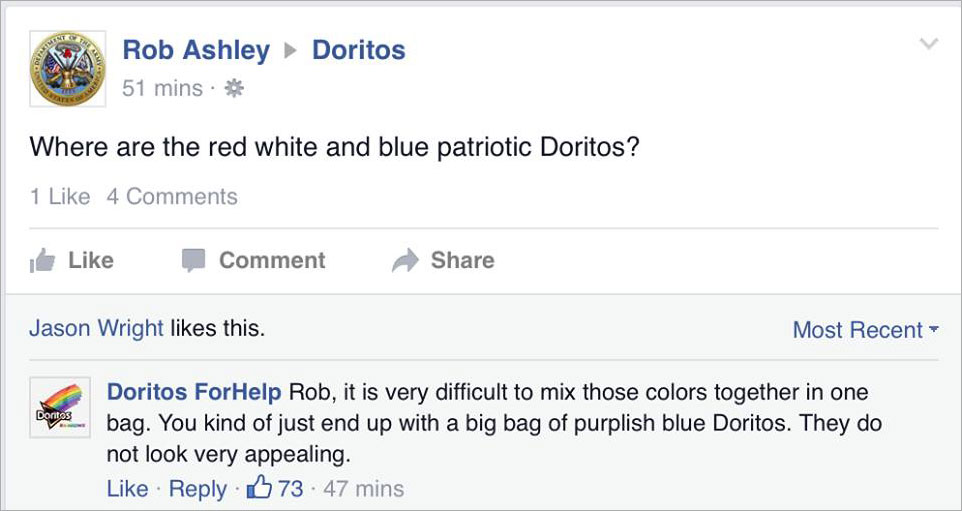 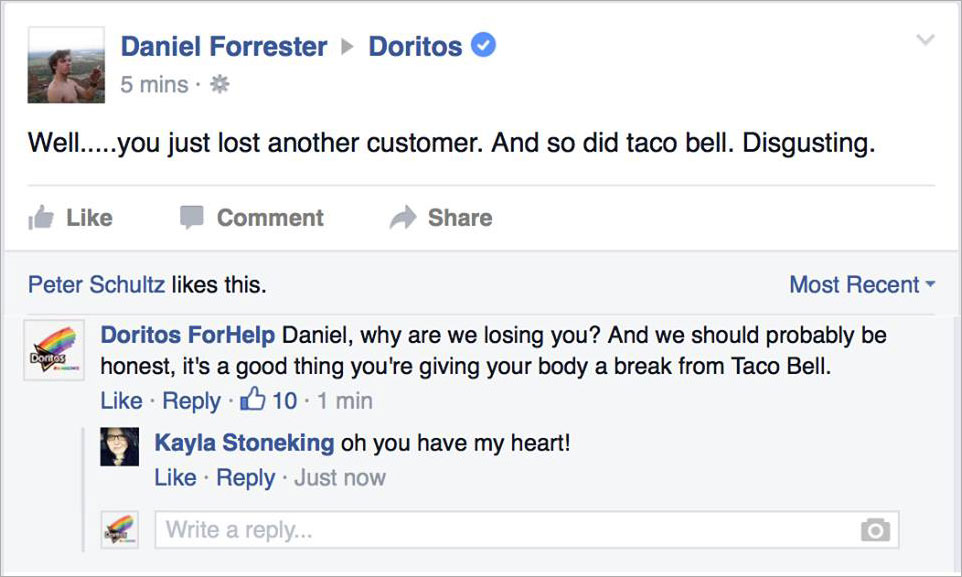 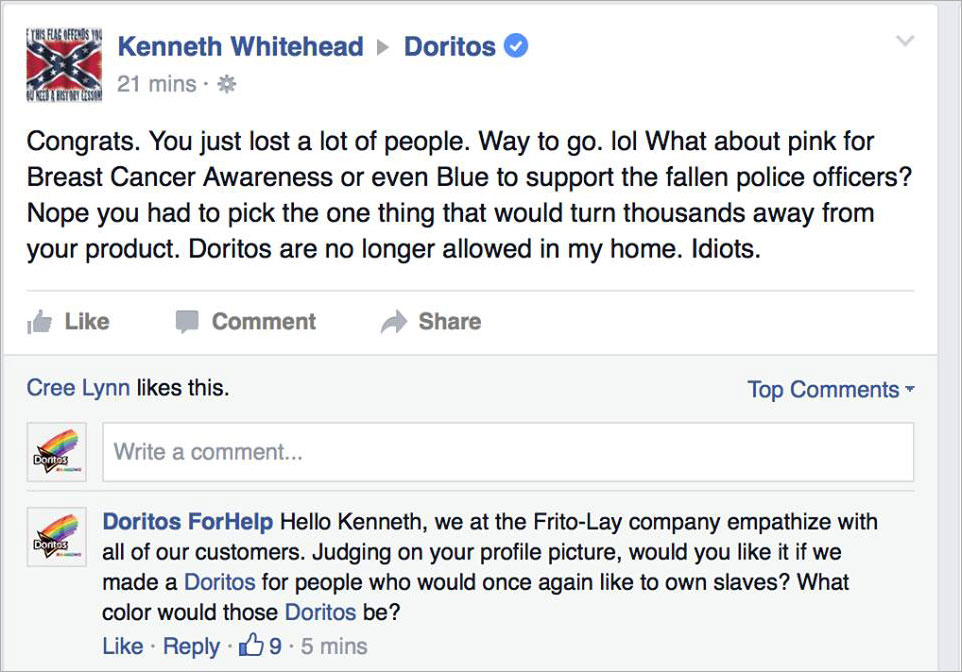 “I would say the Doritos critics on Facebook have definitely been far more offensive than the critics of Target,” he says, “I have seen people saying some pretty hateful things towards the LGBT community. What’s even worse is that these people are really offended for no reason whatsoever.

“Frito-Lay decided to allow anyone a way to voluntarily donate for a cause which aims to help prevent suicide in the LGBT youth. Some of the reactions make it seem as if an army of LGBT people have been unleashed into their private homes. But I mean, this is America and I shouldn’t be surprised that there is such a dramatic reaction over rainbow-colored chips.”

We are so very careful about how we portray ourselves as brands on social media. But in a split second, someone can hack into that and change the game completely. On one hand, this particular personality is pushing for positive social change. On the other hand, its a messy social media world out there, and becoming more and more difficult for brands to be in control

In today’s global marketplace, sometimes the best product ideas don’t come out of this air… they come from re-purposing creativity from around the world to serve new markets. By breaking the traditional top-down product development/testing cycle, brands can develop more innovative products for the global stage more quickly.

Case and point, Doritos “Roulette.”  Doritos Roulette conceals a handful of extra spicy chips in each bag, adding a fun and social element to the eating experience.  Roulette, while developed initially for the Venezuelan market, was picked up by the global Doritos product team as a way to quickly adapt, test and launch a new product with less legwork. Adaptations for North America for instance included a branded #burngallery on Doritos.com, where people could upload selfies of their faces upon getting the hot chip.

More than spicy chips, “Roulette” shows that global brands can learn a lot about new product development by looking internally. Years ago, product development was driven from the top-down and focused heavily on pre-launch consumer testing from a centralized group. But today, the need to deliver innovation to market quickly means that traditional testing methods may not be fit the product cycle. Instead, looking to test/develop different products globally can allow global brands like Doritos to more quickly expand its portfolio of products… in turn enabling innovation to spread across global markets more quickly if successful in lower-risk markets first.