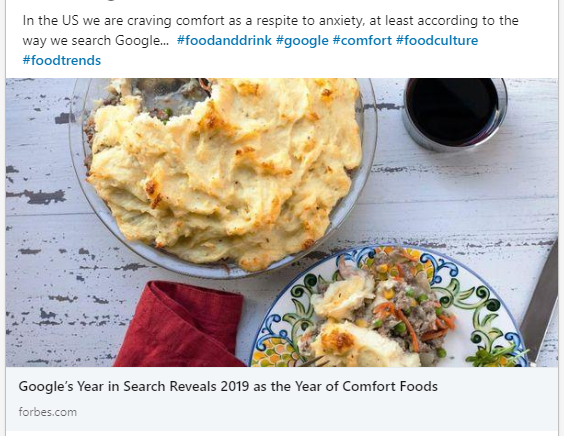 In short, comfort. Whether it’s the grueling polarizing political climate, the endless buzz of tech always pressing for our attention or our own personal life commitments tugging at us in all directions, we seem to be increasingly living in a constant state of anxiety and it’s only natural that we’re craving comfort.

According to Google Search data for 2019, Americans were more likely to be cooking up a Shepherd’s pie or indulging their sweet tooth with a homey snickerdoodle cookie rather than the Instagram-famous Unicorn cake which topped last year’s trending search spot. Speaking of comfort foods, after selling out in just two weeks, Popeye’s now famous chicken sandwich was brought back in the Fall to amazing success.

Why the bend toward comfort foods in 2019? It’s possible that these trending searches for folksy foods are driven by a culture increasingly hungry for an anxiety antidote, a bite of hygge, if you will.

The Pantone Color Institute would agree. They announced recently that the color for 2020 is the classic blue. You don’t need to know much about color theory to know blue = comfort. Pantone settled on a shade that offers “reassurance, confidence and connection that people may be searching for in an uncertain global miliu.”

Specially in uncertain times when it feels like things are always changing and nothing is ever certain, how can we offer our consumers more comfort?

How can brands balance the need to provide new and exciting experiences/innovation while also making them feel comforting and familiar?

Digital games are gaining notice from some researchers who think they’re a novel way to address mental health issues like depression and anxiety. SuperBetter is currently the subject of two scientific trials, including a National Institutes of Health-funded experiment that will begin this summer. A paper by the creator of Personal Zen, published in the March edition of Clinical Psychological Science, shows the mobile game can decrease anxiety in some users after 25 minutes of use.

The Department of Veterans Affairs is internally testing whether more gamelike elements will make its PTSDCoach app, released in 2011, more effective for veterans with post-traumatic stress disorder.

It might seem surprising that digital games are being investigated to treat serious mental conditions. But “gamification” tools like SuperBetter and Personal Zen can increase access to mental health treatment, says Carol Landau, a professor of psychiatry at the Alpert Medical School at Brown University, who specializes in depression treatment. “But here’s the caveat: Nothing replaces face-to-face psychotherapy,” she says. “Think how it feels to be comparing a real person who’s listening to you and giving you these skills together, versus a telephone, versus just a game.”

Ms. Wood, 33, who teaches self-defense and violence prevention in Phoenix, credits SuperBetter with creating a structure that helps her complete tasks—what the game calls “quests”—that make her feel better.

“It encourages you to do these daily, small steps that overall improve your general physical well-being, and your general outlook,” says Ms. Wood. For example, studies suggest that getting exercise or talking to friends can help with depression.

She says the game helps break those suggestions into tasks—”go outside for a few minutes” or “contact a friend”—that she can complete, get points for and feel motivated to continue. She discovered the game after hearing about a TED Talk by SuperBetter creator Jane McGonigal.

SuperBetter has been shown to decrease depression in one trial. Researcher Ann Marie Roepke, a University of Pennsylvania psychology graduate student, recruited participants online to play the game.

I thought this could be specifically applicable to Latuda and/or any partner where gamification could help.  It’s interesting to me that people are going to gaming to balance themselves out- for BPD sufferers, it’s telling me that we may be onto something with the targeting we’re employing… and the gamification program that is potentially being planned.