Crowdsourcing strikes again. Incentivized by the lure of social-capital, users can submit answers to questions posed to Alexa to receive points and status within the network of answer-ers. The public, using the up-and-down vote system will presumably let the best answer float to the top.

Though, “In some cases, human editors as well as algorithms will be involved in quality-control measures,” says Fast Company.

From Fast Company: “Starting today, Amazon is publicly launching a program called Alexa Answers, which lets anyone field questions asked by users for which Alexa doesn’t already have a response—ones such as:

From then on, when people ask a question, Alexa will speak an answer generated through Alexa Answers, noting that the information is ‘according to an Amazon customer.'”

Will value-based questions be answerable? If so, owning the answer to ‘what’s the best burger in Brooklyn?’ would be very lucrative.

Can brands leverage this tech to their advantage? Either by somehow “hacking” this system in playful way, or by replicating such an answer system with their own user base, to plug into an Alexa skill?

On a broader level:

How much do we trust the crowd? Recent history has left many questioning the validity of “the wisdom of the people”.

Civil society runs on a foundation of shared understandings about the world. If we trust answers about our reality to come from the crowd, how will bad actors use such a system to undermine our shared understanding or subtly sway public knowledge to support their agenda? Alexa, does life start at conception?

The inimitable New York Times has created not one, but five new Alexa skills.

Now, people can use their smart speaker to access:

It may not feel a massive innovation, but it’s a savvy move for the Times in a world where people are increasingly eschewing websites. No longer is it enough to build destinations, we have to think about how our brands can be present where people need them, when they need them. 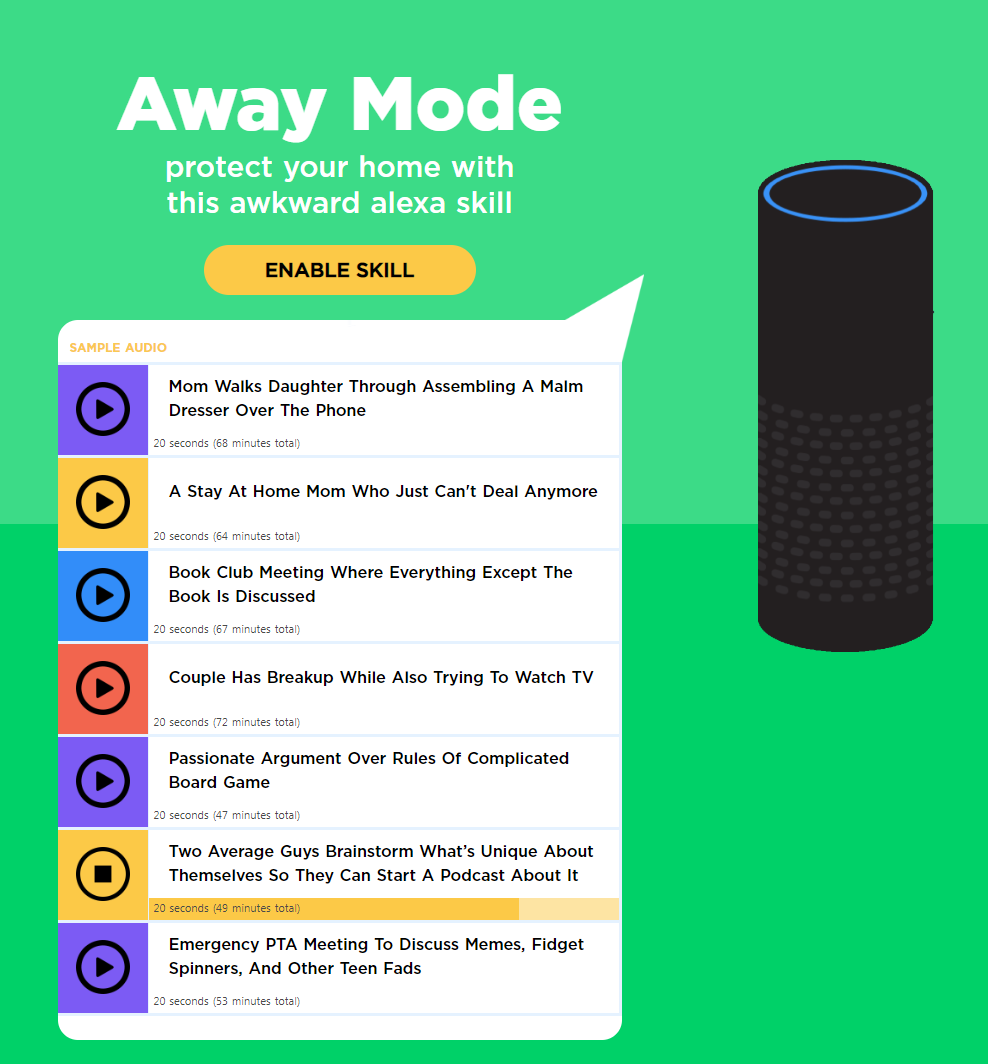 The “modern home insurance” brand Hippo recently created “Away Mode”, an Alexa skill that activates one of seven “awkward” conversations when enabled, ostensibly to trick would-be burglars ala Kevin McAllister.

But while it is a real skill, it’s actually designed as advertising to generate awareness for the three-year-old brand.

According to Hippo, “Hippo was looking for a way to engage a broad audience in a conversation about home security and home insurance. We figured it was easier to drive awareness and education through humour“.

First, it’s another example of  “innovation” as advertising. And while stunts are nothing new in advertising, this is the first time a brand has used Alexa as the chosen platform on which to execute one.

But more importantly, it’s a beautiful way to emphasize its point of differentiation. Hippo bills itself generally as an insurance company with a different outlook, as a “tech company” that “leverages Smart Home technology to prevent disasters instead of simply responding to them”, and its insurance “protects smart home appliances and electronics”.

The Maze, a new choose-your-own-adventure game for Amazon’s Alexa, lets you play the role of a Westworld host, taking you through up to 60 storylines with 400 unique game choices, and up to 2 hours of storylines and narrative choices.

The Game features two of the show’s main actors–Jeffrey Wright, playing Bernard, and Angela Sarafyan, reprising her role as Clementine. Following on a simple chatbot, an AR and VR project, and a life-size replica of the show’s main town, Sweetwater, complete with actors fully in character, built for South by Southwest, the Alexa project, first conceived of in March and completed in just three months, is timed to the highly anticipated finale of season two (this past Sunday).

Those who have an Alexa-enabled device and download The Maze skill will start their adventure by saying, “Alexa, open Westworld” before venturing into the show’s world as a Westworld host–as the humanoid AIs in the show are called. They’ll be tasked with answering questions about the show, and trying to advance through three levels of increasing difficulty.

“Among the storylines users will explore are an encounter with a posse of bandits riding through Sweetwater; a ravenous family of homesteaders in Python Pass; a devious barback at Las Mudas, a run-in with a Confederado in Pariah, and more. Keeping in mind tips like showing the blackjack dealer at the saloon some respect and not pestering a traveler outside The Ranch about her experience at La Cantina in Las Mudas will help users do better.”

Why it’s hot: This is an engaging and shareable game that is right in line with the Westworld cult fanbase. I would be interested to see completion rates, as well as the % of Alexa owners who use it for games. However, regardless – this is a great way to engage this fan base!

Amazon revealed its Alexa Super Bowl spot this week, and as you can see above, the premise is – imagine what it would be like if you were speaking to various celebrities instead of what at this point is a borderline monotone, virtually personality-less Alexa. There’s the anthemic 90-second version above, plus 30-second editions focused on specific personalities like you see below.

In a world where we’ll inevitably rely on speaking to digital assistants, why wouldn’t Amazon, Google, or any others give you the ability to choose your assistant’s voice and personality? And, why didn’t Amazon do it as part of this campaign? We’ve seen it in concept videos, but is this more than just an ad? Having GPS directions read to you by Arnold Schwarzenegger is one thing, but a true assistant you can interact with is a much different scenario. When can we expect this eminently possible future?

During AWS Reinvent Conference in Las Vegas, Amazon announced Alexa for Business Platform, along with a set of initial partners that have developed specific “skills” for business customers.

Their main goal seems to be aimed at making Alexa a key component to office workers:

– The first focus for Alexa for Business is the conference room. AWS is working with the likes of Polycom and other video and audio conferencing providers to enable this.

– Other partners are Microsoft ( to enable better support for its suite of productivity services) Concur (travel expenses) and Splunk ( big data generated by your technology infrastructure, security systems, and business applications), Capital One and Wework.

But that’s just what they are planning to offer and the new platform will also let companies build out their own skills and integrations.

Why It’s hot:
We are finally seeing those technologies give a step to being actually useful and mainstream.
Since Amazon wants to integrate Alexa to other platforms, It can be an interesting tool for future innovations.
Source: TechCrunch

You can now reorder Seamless with Alexa.

From Amazon.com: Reorder meals for delivery or takeout in seconds from all your favorite Seamless restaurants.

This is a hands-free time saver for Seamless customers — and getting started is easy! Just enable the skill, link your Seamless account, and say “Alexa, open Seamless,” or “Alexa, tell Seamless I’m hungry.”

If you’re a first-time user, Alexa will ask for your preferred delivery address and payment type. Just select your preferences to complete setup. You’ll be able to enjoy the convenience of re-ordering your favorite dishes and meals with Alexa anytime.

The skill’s easiest to use — and the most beneficial for you — if you’ve ordered more than three meals with your Seamless.com account and have one or more current credit/debit cards linked to your account. As long as you have an order history, you can use the skill. Of course, it may be more fun for you if you have many past orders.

We’re on the lookout for real utility this smart home and voice assistant technology. This is pretty lazy — but pretty cool.

Over the summer, smart lock maker August announced its first integration with Amazon’s smart home assistant Alexa. It was pretty basic – letting users check whether unit was locked or not. Naturally, people wanted to know, for better or worse, when they’d actually be able to unlock their front door with the sound of their voice, for when you’re chopping onions like the lady in the above press photo.

That follow up functionality has arrived – though it brings a key caveat for safety’s sake. In order to actually utilize the feature, users will have to enter a four to 12 digit PIN code each time, in addition to telling the AI, “Alexa, ask August to unlock my door.”

Here’s CEO Jason Johnson on why the feature was added,

Before adding the unlock feature, we needed to be sure we could maintain our standard for security. Now users have the convenience of using Alexa to unlock their door using their voice and a secure voice PIN from anywhere in the home.

The company has added the extra step for obvious security reasons – you likely don’t want passersby unlocking your front door by simply asking nicely. It’s a necessary security addition, perhaps, but one that seems to mitigate the usefulness of the new feature.

Like the older Alexa skill, this one requires the lock be networked to either the August WiFi Bridge or the company’s doorbell camera.

As a recent loser of my keys, I can appreciate the utility of something like this. What’s interesting is how the intersection of convenience and security will play out — will people be frustrated by extra steps or angry about anything that sacrifices their security? This also a good way to showcase how voice recognition technology will come into our lives in different ways and how the competition of partnerships between Alexa, Google Home, etc. will be fueled.