Wash your hands is a Covid safety imperative. But there are millions of people without access to clean water. One in ten people in the world is denied access to clean water and one in four people out of ten don’t have a decent toilet of their own. Without these basic human rights, overcoming poverty is just a dream, as is good health and combating a deadly virus like Covid-19. International charity WaterAid has been working for a number of years to change this. Right now, that job is even more urgent and it has partnered with Don’t Panic on a new campaign, Bring Water.

The agency picked up the rainbow symbol, which has become part of the Covid community response, a sign of solidarity and belief that began in schools, and that now adorns streets, filling the windows of homes and the temporarily closed windows of restaurants and businesses across the planet. In the campaign film, You Can’t Have a Rainbow Without Water​, real rainbows are documented across the globe.

It was smart to take a common symbol of hope (the rainbow) to make a clear statement that without clean water, there is no hope.

Last summer Procter and Gamble’s Always created a “Like a Girl” ad where a diverse group of girls and young women were asked what it means to do something “like a girl.” The feminine products brand took this phrase and changed it to be an expression of strength, and it got a slot in the Super Bowl.

This next phase similarly features a group of girls and young women who instead talk about limitations as a result of social norms. They then kick and stand on cardboard boxes with the limitations and stereotypes written on them, symbolizing their strength against the restrictions they face as girls. The video also includes statistics about girl’s confidence and how they view societies standards.

With over 25.4 million viewers on Fox watching the Women’s World Cup final this past Sunday (a record for any soccer game– men’s or women’s), and Facebook now making men and women equal in their new Friends icon, it is clear that now is a time where women’s empowerment and the ability for us to be seen as equals is prevalent in our society. I think this ad will resonate well viewers and stir up some emotions with their powerful message about confidence and power.

Read more about the Ad here.

When Instagram added video to its social network, it allowed people to share their moving images in 15-second bursts. But limitations like time constraints always yield creative hacks, and to promote the Toronto Short Film Festival agency Red Lion found a way to turn the photo sharing platform into a choose-your-own-adventure silent film.

By using clips from the seven silent films included in the festival, users can string together a short film based on a series of decisions. Opening with a street fight scene, viewers are given the choice to call the cops or run away. Clicking the #hashtag of your choice, you’re taken to the next video. From there you can hide in a department store or a hospital, then go on a date, only to fake sick to get out of a horrible dining experience. At least, that’s one of the many films that can come from the experience…

The new campaign will be socially-based and content-led through a combination of 6 celebrity brand ambassadors, social consumer challenges, and local interpretations of the campaign around the world. Also, every time consumers around the world use the hashtag #PepsiChallenge in their social media channels, the brand will make a donation to an organization committed to bring light to people around the world.

The brand will be working with Usher, Serena Williams, Colombia and Real Madrid soccer star James Rodriguez, Usain Bolt, designer Nicola Formichetti, and social media phenom Jerome Jarre throughout 2015, to announce a series of challenges from March to the end of the year, which PepsiCo Global Beverages Group chief marketing officer Kristin Patrick says are designed to push consumers to push themselves and dream big (…not to mention, sell product). “The challenges will ask consumers to do things, submit things, it could be a piece of writing, a selfie, the range will be from challenging to things anyone can do,” says Patrick. “In the past we’ve been linked to sports and music. Consumers passions are evolving and the world of culture is increasingly connected—film and fashion are connected to music, all these entry points all work together. And if you look at celebrities today, while the do stand in a particular genre, they also have different points of interest across culture. So our challenges will be across technology, sports, music, and design.”

In today’s cluttered digital world, a simple re-launch or celebration of the original wouldn’t likely break through. Pepsi’s interpretation of this new campaign is an effort to take the spirit of the original success and make it relevant way beyond the taste of Pepsi and into the lifestyle of consumers.

“Pepsi, as a brand, is much bigger than a cola and is considered a pop culture brand,” says Jakeman. “We have to innovate around the brand from a product perspective so that we’re meeting the changing consumer demands but in our marketing we’re moving beyond just the core Pepsi advertising and really advocating the trademark that encompasses all the brands while still retaining the Pepsi lifestyle promise.”

The iconic Meow Mix jingle is getting a meow-remix. And cat lovers everywhere are invited to try their hand at creating their own version of the original “meow, meow, meow, meow” jingle. Cat lovers were invited to head to various NYC locations this past week, to meet singer Kellie Pickler and to make their own versions in a mobile sound booth — equipped with professional microphones, cameras and a DJ. They were encouraged to share their spins on the Meow Mix jingle and love for their cats via social media, with the opportunity to appear on Meow Mix’s own social channels, including Facebook and Twitter. See the site: http://meowmix.com/itsmeowtime/

And it’s all for a bigger cause: For every jingle, Meow Mix will donate 100 meals to the Food Bank For New York City, with an overall goal of 100,000 meal donations. The author of the best jingle remix stands a chance to win a trip to Hollywood to film a video for it. “The goal is to raise awareness about Meow Mix as well as drive brand affinity and loyalty,” Carrie Schliemann, the marketing director of Meow Mix, told Digiday. “We wanted to leverage our jingle and use it show how our brand stands for humans and cats connecting over meals.” 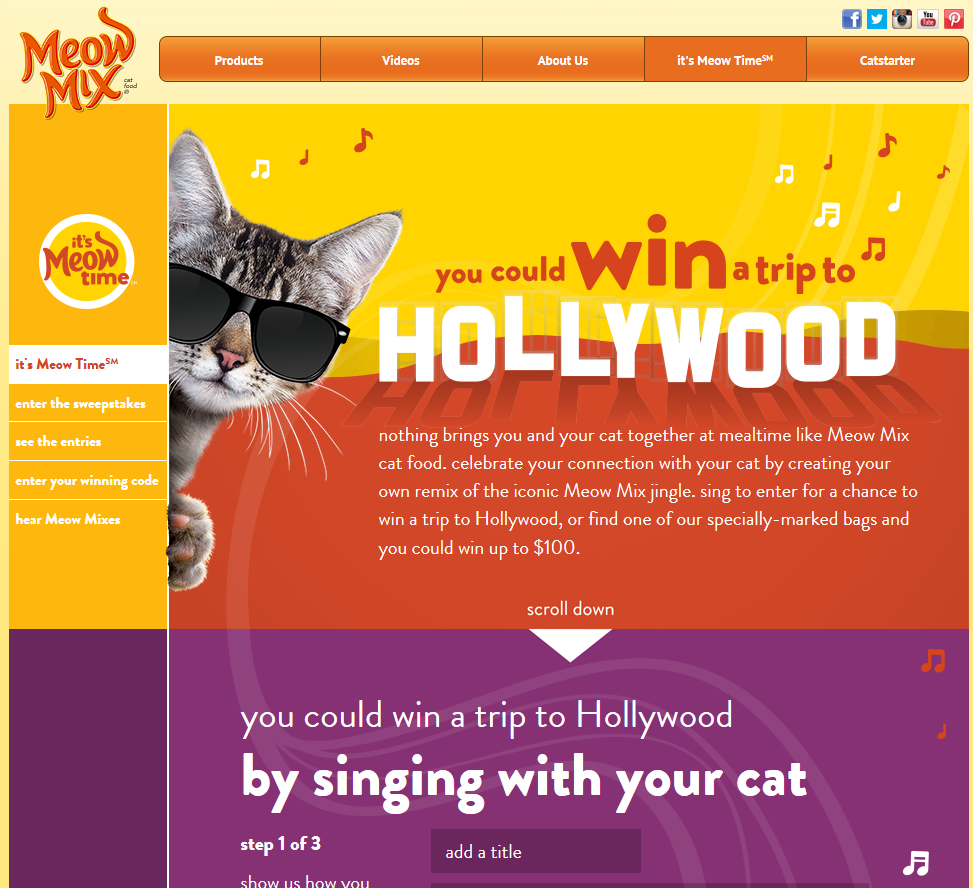 “Music and cats are arguably the biggest things on the Internet today,” said Todd Tilford, the chief creative officer at FCB Chicago. “And if there’s one brand that has a right to come up with this, it’s Meow Mix — because of the famous jingle.”

By capitalizing on human nature to showcase their own skills and feature their pets — all for a good cause, the campaign was sure to be a hit in connecting with audiences. Speaking to the catchy heritage of the brand, Meow Mix was able to foster sharing and drive equity & awareness. The first EDM jingle remix has already gathered almost 158,000 views on the Meow Mix YouTube Channel!