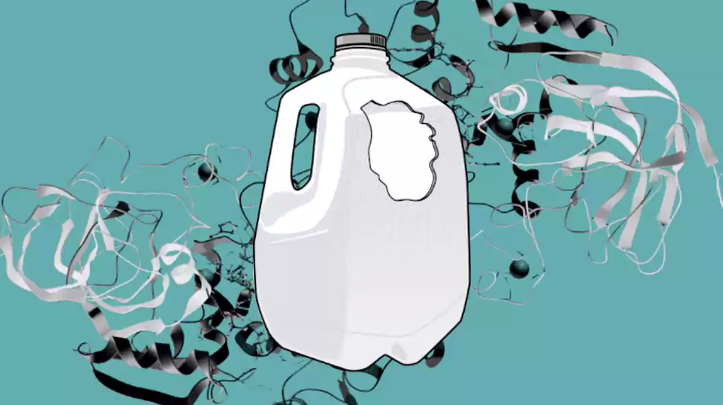 Scientists from Hitachi and Cambridge Consultants, an engineering and product development company, are using synthetic biology to manufacture a plastic-eating enzyme with the goal of being used in recycling plants or in the environment—and potentially even in the ocean, where as much as 12.7 million metric tons of plastic ends up every year. Essentially, it’s seemingly a hands-off solution to the plastic problem.

“Attacking the problem biologically means that you have the ability to come up with a range of solutions,” says James Hallinan, business development manager of synthetic biology at Cambridge Consultants.

“It’s really about the engineering of biology, making it predictable and definable and reproducible,” he says. “And this idea that, in the future, more and more products are going to be made via a biological process, as compared to the old traditional way of making things from chemicals, and in particular petrochemicals.”

The company has also been looking into ways to make plastic biologically instead of from petrochemicals, but the current issue is obviously the plastic that exists (a 2017 study estimated that of the 8.3 billion tons of plastic that humans had produced since the material was invented, around 6.3 billion tons ended up as waste; only 9% was recycled). It’s interesting because we hear of packaging becoming more sustainable, recycling, etc. but little about what to do with the plastic that is already here which is why this company is particularly interesting.

Around the world, there are several other research projects exploring the potential of these plastic-eating enzymes. In the U.K., scientists studying the Japanese bacteria accidentally created a version of the bacteria’s enzyme that worked even better, breaking down plastic bottles in days rather than weeks. At the National Renewable Energy Laboratory in the U.S., scientists are also working on the enzyme—called PETase, because it can eat PET plastic—to make it work faster. Researchers in Germany studied the structure of PETase to optimize it. And in France, a startup called Carbios has developed its own enzyme, which can fully break down PET plastic so it can be recycled into new, consumer-grade plastic of the same quality as virgin PET.

Something that makes this strategy unique is that the plastic doesn’t have to be clean and can be broken down completely. “We take these plastics back down to some of their precursor components, and then they are maybe in a better position then to be reused and reincorporated into new materials,” Hallinan says.

They are also concerned about the effect on the environment by the actual product of the enzyme and its outputs as it breaks down the plastic.“They have a recognition that they’ve got a responsibility to both their customers and also to the planet in general to ensure that what they’re developing and the products they make for the planet are good for the planet, in the long run,” says Hallinan.

Companies like PepsiCo and Nestlé are now partnering with the company, which plans to begin building its first demonstration plant this fall. The collaboration will include technical milestones and support for the efficient supply of consumer-grade, 100% recycled PET plastics for their global markets.

Also, what if the enzyme got somewhere it wasn’t supposed to be and started to eat all plastic i.e. tables, boats, shoes, etc.?