Earlier this year, Pinterest began serving a straightforward message to users searching for anti-vaccination content on its platform:

“Pins about this topic often violate our Community Guidelines, which prohibit harmful medical information.” With this change, Pinterest made two things clear: Anti-vaxxer content was harmful, anti-science stuff. And Pinterest would have no part in its propagation.

Now Pinterest has updated its anti-vaccination landing page with an improved design. Rather than being a dead end, the company has, as a spokesperson puts it, “built relationships” with groups like the Centers for Disease Control, the World Health Organization, and the American Academy of Pediatrics to provide pins that offer simple science and facts, like the number of lives saved yearly from vaccinations. The information is sourced directly from these agencies. 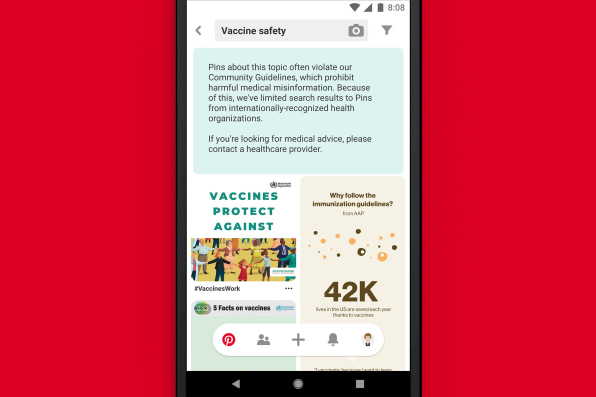 This decision comes as the United States is at risk of losing its measles elimination status this October amid ongoing outbreaks, according to the director of the CDC’s National Center for Immunization and Respiratory Diseases.

Why its hot
Naturally, people aren’t going to Pinterest necessarily to read up about anti-vaxx theories. But it is heavily visual and so easy to spread information, or misinformation, quickly in little infographic, bite-sized images. You don’t even really need to click through to anything to get the story. Pinterest is taking a much stricter stance than our social media platforms and considering its user demographics, time will tell if there is any blow back.