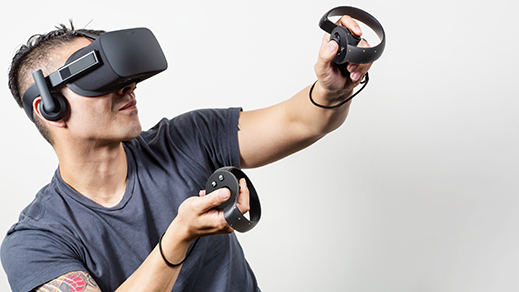 Oculus Rift, won’t be released until next year and a price has not yet been revealed, but it got a little closer to reality today as the company officially unveiled it along with a unique pair of circular controllers.

The device is perhaps the most anticipated of the coming virtual-reality headsets. The company, which was purchased by Facebook for $2 billion in 2014, plans to release it during the first quarter of next year.

“It’s really lightweight, it’s comfortable,” CEO Iribe said. “You can slip it right on.” Oculus founder Palmer Luckey also showed prototypes today of hand controls called Oculus Touch that the company hopes will make it easy to use your hands in virtual reality, whether you want to pick up and fire a gun or give a friend a virtual thumbs up. The gadget looks like a tiny game controller for each hand, complete with buttons and a trigger, surrounded by a black semicircle. It will be released in the first half of next year.

Luckey said the controllers are meant to allow precise, quick control of virtual objects without requiring the user to really think much about it. With the controllers, users can also make hand gestures like pointing, waving, and giving a thumbs up, he said, and developers can add haptic buzzes to games that you’ll feel with the controllers.

In addition to the small handheld controllers, Oculus is partnering with Microsoft to include a wireless Xbox controller with the Rift headset, and the Rift will work natively with Windows 10. The Rift will also work with games made for Xbox; Oculus created a virtual cinema where the games will be available.

While a number of gaming companies—including Gunfire Games and CCP Games, who were on hand today—are already making games for the Rift, the work with Microsoft will make many more games available for the platform right off the bat, and could entice more game developers to build games expressly for Oculus.

Why Its’ Hot. Virtual and augmented reality could enable all kinds of applications from gaming to health care.