Ikea has repeatedly asked people not to play hide-and-seek in its stores. And yet people keep organizing massive, thousand-person games at Ikea.

In 2014, a Belgian blogger named Elise De Rijck coordinated a hide-and-seek meet-up at her local Wilrijk store to celebrate her 30th birthday. She created a Facebook group and invited her friends—but soon, thousands of people had joined the group. Ikea Belgium got wind of the plan and instead of squashing it, offered Ikea’s full support, including extra staff and security to host the event. From the photos that still circulate online, the event was a riot, replete with people hiding under bins and beds all over the store. 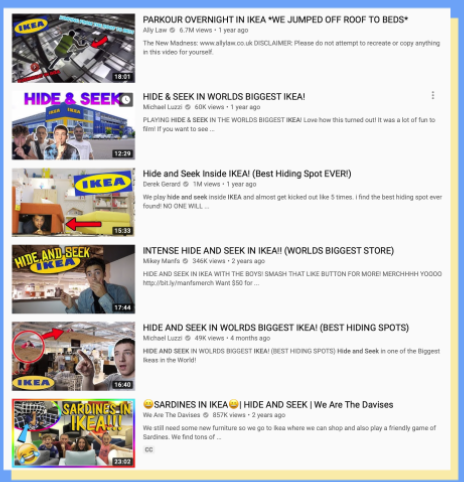 Evidently, it was not a one-off thing for the people playing. Thanks to the organizational power of Facebook, Ikea hide-and-seekers have kept organizing—especially in the Netherlands it seems. By early 2015, 32,000 people had signed up on Facebook to play in Ikea’s Eindhoven store. Nineteen thousand people signed up for a game in Amsterdam, while 12,000 signed up for a game in Utrecht. While it’s unclear how many of these games actually occurred, Ikea hide-and-seek has become a *thing*, as evidenced by countless YouTube videos where “adults” are sneaking around to play unofficially.

Just this week, authorities in Glasgow foiled a new plan for a 3,000-person game in the Scottish city’s Ikea store. Employees at the local Ikea spotted the plan on Facebook and called the police, who turned away the would-be gamesters. An Ikea spokesperson told The Scotsman, “We need to make sure people are safe, and that’s hard if we don’t know where they are.

Ikea’s crackdown on hide-and-seek makes sense. But at the same time, it’s hard not to see the phenomenon as a potential opportunity for the company, which has been working desperately to reinvent itself, rethinking its store designs and opening smaller urban stores that are really just a showroom for digital orders. No, it probably truly isn’t safe to play guerilla-style games at a store that sells heavy furniture. Then again, Ikea has thousands of people excited about driving to the very suburban box stores it wants people to visit. Isn’t that a potential opportunity, rather than a problem?