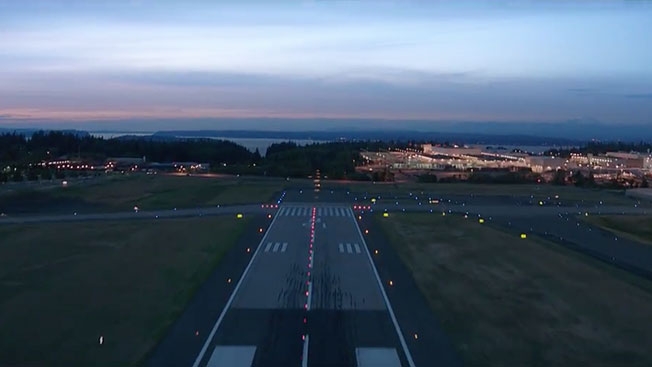 The new Delta commercial from Wieden + Kennedy in New York spends 45 of its 60 seconds staring at the ground, yet it’s the most high-concept airline ad in a while.

It’s also either quite inspiring or a bit dismaying, depending on your level of comfort with airline ads that focus on the actual terrifying physics of giant machines hurtling along at great speeds. It aims for the former, naturally, but leans toward the latter at the outset, as Donald Sutherland intones, in a gravelly voiceover, “What’s happening here is not normal.”

That’s a bit of a funny line to open an airline commercial, even if Sutherland quickly follows it up with the disclaimer, “It’s extraordinary.” And the rest of the poetic voiceover—combined with visuals that are hectic and claustrophobic until almost the very end—doesn’t exactly lighten the mood.

Later, in another part of the voiceover, Sutherland takes stock of a Delta jet furiously in motion—”291 people, 350 tons, 186 miles per hour”—and then suggests, bluntly, “There is no stop in us. Or you. Only go.” That’s meant to be a good thing, though it risks conjuring imagery of not being able to stop—and might have you pining for one of W+K’s famously inventive safety videos for the same carrier.

This Ad, which debuted on YouTube, offers a completely new perspective to flight.  It’s brave because it introduces sights and sounds that could potentially be terrifying to some customers. By taking a chance, they have achieved a cinematic effect that truly plays on your senses. This Ad gets your heart racing, your blood pumping, and some cases your stomach churning.  For better or for worse, this ad is successful at getting you to think about flying.