With the Super Bowl this weekend everyone is so excited to see the commercials because that’s what most people tune in to watch anyway.

GoDaddy.com, a privately held Internet domain registrar and web hosting company is pretty famous for their racy Super Bowl ads. Well this year, they have a commercial that sparked a lot of controversy.

Instead of featuring a woman this year, their ad features a cute puppy. It’s about a puppy that is lost and can’t find its family. The commercial shows the puppy going through a rough time finding its way home. When the puppy finally gets home the owners are so excited to see it because they just sold the puppy online from a website built using GoDaddy.

People took to social media to talk about the horrible commercial. 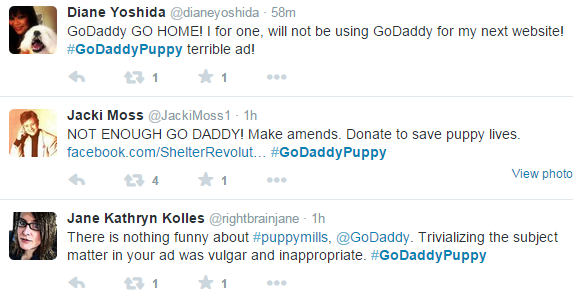 Don’t worry, you won’t be seeing the commercial during the Super Bowl because GoDaddy pulled the commercial. They issued a statement saying, “This morning we previewed GoDaddy’s Super Bowl spot on a popular talk show, and shortly after a controversy started to swirl about Buddy, our puppy, being sold online. The responses were emotional and direct. Many people urged us not to run the ad.”

Commercials are one of the main reasons why people watch the Super Bowl. This is important because it shows how fast people turn to social media to express their concerns.