Today Google announced the launch of Family Link, an application for parents to keep tabs on what their kids are doing on their devices, especially for those younger than 13. Family Link requires that both parent and child use Google’s Android phones and tablets. The parent will first download the Family Link mobile app to their own device so a Family Group is created on Google, which establishes the parent as the group manager. Then the parent will set up the child’s Google account and when your child signs onto the new phone the first time, the Family Link app will automatically install to complete the setup.
Think of Family Link like parental controls plus monitoring. The app allows parents to do the following:
• Track kids’ location.
• Require permission for new app installation and see which apps kids have installed.
• Put kids’ phones to sleep when it’s time for dinner, homework or bed.
• Set a “bedtime” and sleeping hours during which devices can’t be used.
• Identify which apps are your kids’ favorites. At any time, a parent can see just how much time they have been spending in various apps. And what they have used in the last 7 and 30 days.
• By default, mature and adult-only apps are blocked inside Google Play so your child can’t even see them though parents can alter the settings to be more or less permissive.
• Set a new unlock code if kids forget their own.
• Ring the phone’s ringer to find lost devices.
• Set which apps get access to the camera or microphone.
Parents cannot see things like which websites their kids visited or who they sent messages to or e-books they read. Kids can also find out exactly what parents see, because they have the app, too. “We don’t want kids thinking Google has built spyware,” said Saurabh Sharma, Family Link’s product manager. “That’s where transparency comes in.”
The app is in a limited testing phase for now and Google is open to having testers try it out and provide feedback. Google hopes to make the feature available in the US in early summer and later this year in other countries as they navigates local laws. An iOS version is not yet available, but it is in the works. 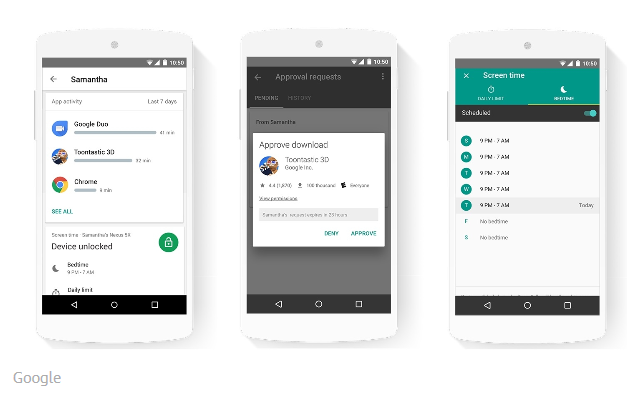 Why It’s Hot
56 percent of kids in the US aged 8 to 12 have mobile phones. Family Link addresses the trend of kids accessing the internet at younger and younger ages. Google allows parents to deselect apps they don’t want their kids to use. Android Pay and YouTube are off limits for all kid accounts (though YouTube Kids is available). Every family is different as far as rules around screen time go, so Family Link takes this into account. Google lets you set a different limit for each day of the week, and you can also set a specific Bedtime period, where the device automatically locks up at a certain time of night. Of course, no tool is going to substitute for the guidance, understanding and rules parents will put in place for their own kids. Family Link opens up the conversations between parent sand their children regarding smartphone and online behavior.