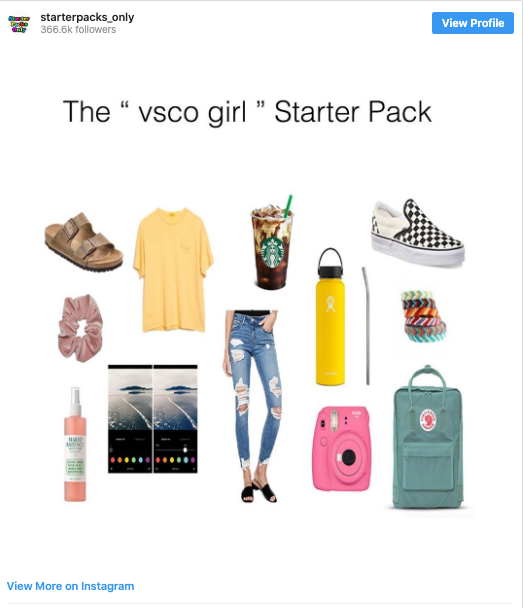 VSCO is a new photo editing app, popular with Gen-Z girls that has had rapid growth in 2019. Over the summer a VSCO girl meme took off and became a thing from the starter pack pictured above to some stereotypical mocking..

VSCO girls were always sort of a joke. Way back in January, YouTuber Greer Jones delivered a deadpan introduction to a video called “becoming the ultimate VSCO girl”: “Today I’m going to be trying to become a VSCO girl, because that’s my life goal, you know, I’m not focusing on college, not focusing on my grades, because that’s irrelevant,” she says sarcastically. “I really look up to the girls on VSCO.”

VSCO  is on pace to surpass 4 million paying users in 2020, up from 2 million paying users in late 2018, the company said. Approaching $80 million in annual revenue, VSCO charges an annual subscription fee of $19.99 for access to a full-suite of mobile photo-editing tools, exclusive photo filters, tutorials and more. For no cost, users can access a handful of basic VSCO filters, standard editing tools and loads of content published by other users in VSCO’s photo feed.

75% of VSCO’s registered users and 55% of its paying subscribers are younger than 25, giving the company a small foothold into the most coveted demographic. On top of that, the hashtag #VSCO has been viewed 4 billion times on the immensely popular video sharing app Tik Tok, again according to the company’s own statistics, and another 450 million times on Instagram.

Keep an eye on this apps popularity…