Alcohol has long been known as a social lubricant, which is exactly why Nordic agency group Hasan & Partners has created a device that dispense beer only when two people are charging their phone together. Installed at this year’s Eurobest, a celebration of European creativity held in Helsinki, the concept is designed to make networking more enjoyable, while also preventing too many awkward silences.

Built by Hasan & Partners’ sister company, Perfect Fools, the device dispenses Carlsberg beer whenever two phones are being charged at the same time. It’s powered by Raspberry Pi, and uses a USB hub to detect when the phones are connected. This in turn opens the draft taps on the beer dispenser, resulting in a much more refreshing way to catch up on the day’s events. 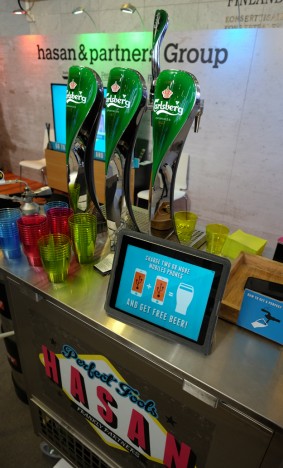 To take sharing a step further, the agency also created a virtual slot machine game that only works when people share their location (the Hasan & Partner’s stand at the conference) via Facebook or Twitter. Games can be played on mobile, but are also displayed on giant LCD screens at the stand. Prizes include deluxe cruises from TallinkGrupp, chocolate from Fazer, and a chance to share your work with Hasan herself, and Eka Ruola, CEO/CCO of Hasan & Partners.

Though a device like this might never take off en-mass, Hasan & Partners have created a model that brands could leverage in OOH campaigns. The idea of “strangers” charging could align with certain brands like Coca-Cola who position their product as bottled happiness that change a person’s disposition. Providing utility like phone charging can add immediate value to consumers, and added functionality like games can keep people engaged in (branded) content. Plus, phones take some time to charge… that’s a lot of free time they could spend with a brand.