Last Friday, Aviation Gin and its celebrity owner Ryan Reynolds got the ad world excited after hiring the actor from the much-maligned Peloton ad to star in a fun sequel spot. The booze brand and Reynolds were deservedly celebrated across social and major media for both the quality of the spot and the speed and agility with which it was executed, soon enough to ride the wave of Peloton-bashing and land an incredibly good comeback. “If you’re going to do something like this,” Reynolds told The New York Times, “you have to jump on the zeitgeist-y moment as it happens.”

Around this same time, at Art Basel in Miami artist Maurizio Cattelan was attracting headlines when his piece called “Comedian”—a banana duct-taped to the wall—sold for $120,000. The subsequent outrage and amusement of course quickly caught the eye of the world’s social-media marketers, sparking a rush of brands scrambling to make their own witty version.

Reply with your best offer. pic.twitter.com/djaZa3Qwzm 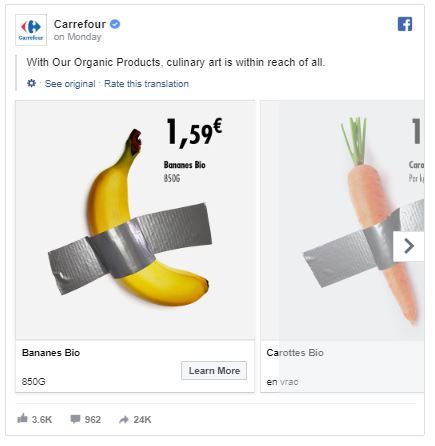 Aviation Sales Teams: Wow, that bike spot is being well received! Now we know what a "meme" is. How are we going to keep the buzz.

Aviation Sales: No, we need more of these "memes".

Between Peloton and “Comedian,” last week presented two moments seemingly perfect for the kind of participation that brands crave on social media, and yet each also illustrates the level of difficulty in actually pulling off something that is a) actually any good, and b) able to grab people’s attention.

It’s interesting to see which brands jump on this meme-culture train and makes me wonder if it’s overdone.