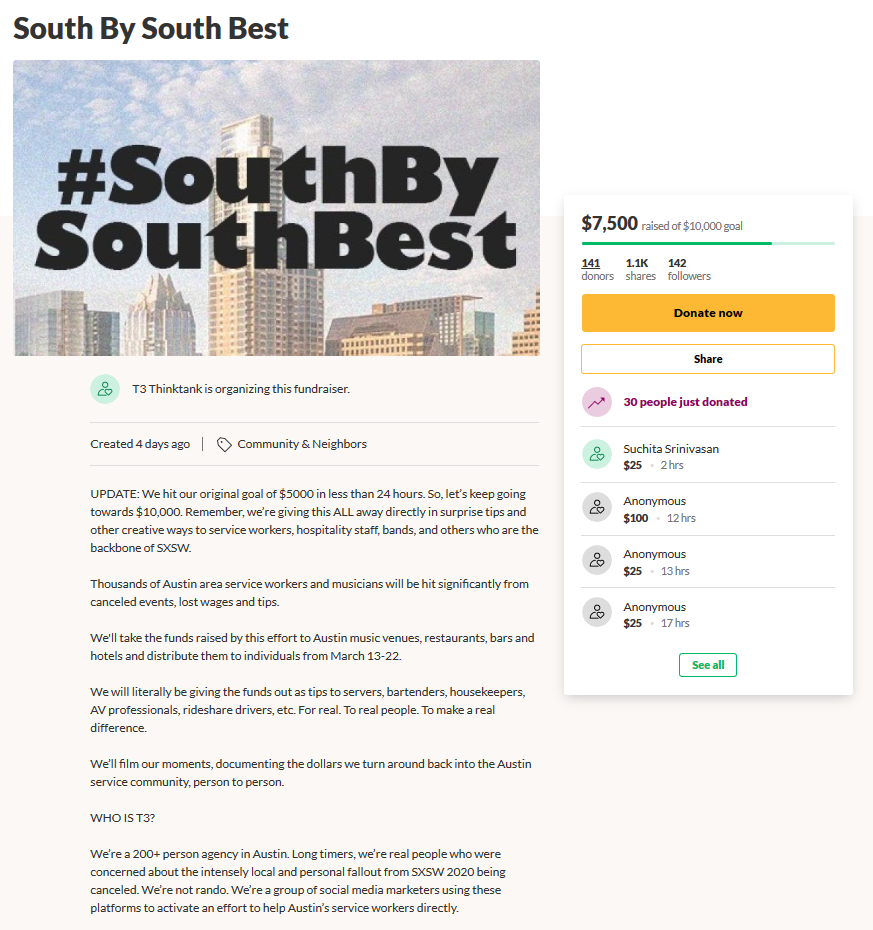 From Fast Company: “A branding agency in Austin, Texas, has launched a GoFundMe page to tip the local service workers impacted by the cancellation of this month’s South by Southwest festival. “Thousands of Austin service workers and musicians will be hit significantly from canceled events, lost wages and tips. We’ll take the funds to Austin music venues, restaurants, bars and hotels and distribute them to individuals from March 13-22,” write the fund’s creators, from the agency T3.

Nearly half a million festival-goers were expected to arrive in Austin beginning this week. The giant culture festival that mingles artists, musicians, and startups was canceled on Friday by the city of Austin over COVID-19 concerns, following the pullout of companies such as Facebook and Twitter, as well as an online petition with over 55,000 signees calling for a cancellation. Festival organizers said they are “devastated,” and local hotels and venues that depend on attendees’ spending say they may be put out of business.”

Amid talks of a $15 minimum wage and Medicare For All in the US, the coronavirus is making it even more painfully clear how many people are living just on the edge of ruin.

Covid-19 is wreaking havoc on the economy, and since no one wants to gather in the places where these people work, service workers are going to be hit particularly hard. A hyper-aware public seems receptive to brands that “protect their people”, so it’ll be interesting to see how brands attempt to spin that in their favor.

“We’re not doing this for publicity, but to help our city.” They say they aren’t doing it for publicity, but they sure are getting a lot of publicity for it. This is a do-gooder publicity stunt that everyone can get behind, coming not from a consumer brand, but from an agency. Unfortunately, they’re unable to innovate on actually helping service workers, and this stunt continues to perpetuate the system that keeps service workers in such a vulnerable position.

It’s a nice story that brands can do good in the world, but everyone should remember that sometimes brands just can’t solve certain social problems.