Whether it’s pointing out the litany of forgettable characters on Game of Thrones or how Queen Elsa of Frozen is really a manic-depressive with god-like powers,Honest Trailers consistently entertains the Internet with its brutal takes on popular films and shows.

On Tuesday, it released its latest episode, mocking Divergent, which it accurately labeled as a Hunger Games knock-off that made things a little too convoluted.

The key to selecting which movie goes under the microscope is part fan demand—Divergent had been one of the most requested Honest Trailers—and part ability to go viral, said Andy Signore, vp of programming at Defy Media and creator of Honest Trailers. He said while you can’t always predict what will be a hit, all viral videos have one key element: They keep it simple.

“You don’t want to get too complicated with your idea. You want some foot in a relatable topic. That’s always the first step,” Signore said.

Since Screen Junkies—which was originally part of Break Media—debuted Honest Trailers on its YouTube channel in February 2012, its number one show had been watched more than 320 million times. Also, its most popular episode on Frozen has more than 15.6 million views. (Break Media partnered with Alloy Digital in Oct. 2013 to create Defy Media.)

Due to Screen Junkies’ success, Signore said brands like Skittles and Best Buy often buy pre-roll and end cards for its episodes. Getting a company to subject itself to a brutal re-examination, however, isn’t the easiest thing. “It’s hard to work with a specific movie itself,” he admitted. “Sometimes, they don’t want to be honest about their movie.”

Screen Junkies has had success in doing native integrations with its other programs, including The Screen Junkies Show! and Screen Junkies Approved. Signore has noticed that his audience has grown to accept brand integrations, provided the material is useful, helpful and not out of the realm of usual content.

For example, to tie in with X-Men: Days of Future Past, the team worked with Norton Anti-Virus to create a show around best mutant powers. “That was a topic we would have done anyway. We just had to figure out a way to help them in their own goals and fit what our audience wants,” Signore explained.

If you’re a publisher who aims to reach film nerds, making sure your viewers are happy is key, Signore added. And if your fans like what you’re doing, then the ad campaign is more likely to succeed.

“There are a lot of people doing great film reviews and commentary. If you are passionate about it, you’re entertaining and you know how to market your voice in a clever fresh way, you can succeed,” Signore said. “You just have to do it consistently week to week, and make sure you’re pushing your own content.”

Almost everyone has multiple devices that require charging. A new product called thingCHARGER aims to make the process a little easier and neater, as it goes right over an existing outlet, and docks various devices on top for easy charging.

The core design of thingCHARGER is very simple. It plugs in over an existing outlet, leaving the plugs usable, and features top-mounted charging tips that allow the user to charge their phone, tablet, reader, or other device. The tips are stored inside of the charger, and can be swapped when needed. Basically, it’s like having a dock right on a wall outlet.

On the bottom of thingCHARGER are two USB ports, so if a situation arises where one needs to charge many devices at a time, it’s still possible to do so without taking up the main power outlets.

An interesting aspect of the design is that the chargers can stack, so a user could plug three into one outlet and then dock three different devices at the same time. When done, it looks way cleaner than it would with three different charger cables sticking out of the wall at once.

To save power, the main outlets are on at all times, but the two USB ports and the tip on the top of the thingCHARGER are only on when a user hits the power button on the side.

WHY IT’S HOT: Because this has been needed in lately as technology has transformed and progressed. More and more devices have incorporated themselves into each individuals life, in an extreme case, where one has a personal mobile phone, a work/business phone, tablets and nooks, lap-tops, mp3’s, along with other appliances that need an electrical outlet in order to perform. The thingCHARGER allows you to charge your multiple devices along with satisfying the need to pug in another appliance in a neat manner. It subtracts the number of annoying cords coming out of one outlet allowing more room.

NEW YORK—Meet Baxter, a six-foot-tall, 300-pound industrial robot with a tablet for a face. If you’ve ever seen or read a sci-fi story where factory workers are replaced by robots, Baxter is that robot. It can pack things in boxes. It can inspect, sort, and align parts. Baxter can even do “light” assembly. For $25,000—about the average annual cost of a US production worker’s salary—customers can drop Baxter into a repetitive assembly line job and have it work alongside its human counterparts. 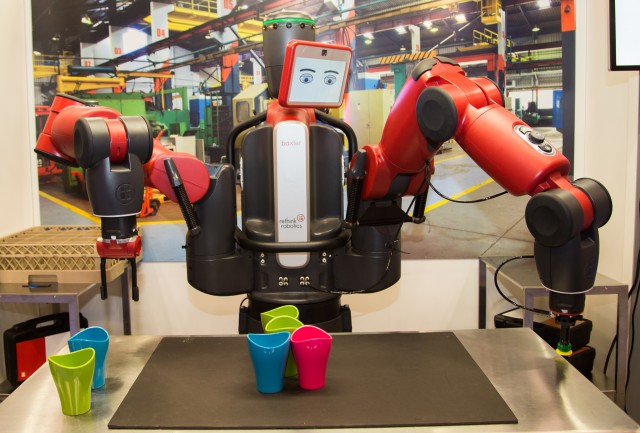 Baxter has two arms with five joints each, allowing it to move items from one location to another. The torso contains the computer and a few vacuum connections for the optional suction cup hands. The head is a (non-touch) tablet used to work Baxter’s UI, show what Baxter is currently paying attention to, and communicate status.

This robot doesn’t really have “legs” and can’t move on its own—it’s just a torso on a stick.  The torso can be bolted to a table or placed on a stationary pedestal. There is also an optional unpowered, wheeled base, but mostly Baxter is content to sit at its post in the factory.

Baxter is built by Rethink Robotics, a company that was founded in 2008 by Rodney Brooks. Brooks is the co-founder and former CTO of iRobot, makers of the popular robo-vacuum the Roomba (not to mention some scary military robots). Like iRobot, Rethink Robotics is making actual, for-sale robots as opposed to research and PR-driven products like Honda’s ASIMO. The company even sells accessories and extended warranties.

One of the coolest things about Baxter is that anyone can use it. The bot can be trained to do a task without ever needing to call in a software engineer. You teach Baxter how to do something by grabbing an arm and showing it what you want, sort of like how you would teach a child to paint.

On Baxter’s wrist is a pair of buttons, and above that is a touch-sensitive panel right where you would naturally grab the wrist. Gripping the wrist puts Baxter’s arm in power assist mode, allowing you to freely move the heavy arm around with just two fingers. When the touch panel is activated, Baxter stops what it is doing, and the head whips around to see what you are going to show it. The two buttons work out to “Save arm position” and “activate grasper.” So to unload stacked items in a box, just grab the arm and put it on top of the stack, hit the arm button to pick something up, move the arm over to the table/conveyor belt/whatever, and then press the arm button again to release the item. Do this for each item in the box, and Baxter will be able to handle every other box from here on out.

In “run mode” Baxter’s screen shows face, but when it’s time to teach Baxter something, the face moves out of the way and the teaching interface pops up. The two large, grey circles are the wingspan of each arm, the smaller circles are the shoulders, and the plus signs are the hands. The up and down arrows indicate picking something up and putting something down, and everything is color coded blue and yellow for the left and right arms, respectively. In the first screen, Baxter is going to pick up something on its right and put the item down in front of it. Baxter is going to do this 50 times, as indicated by the 0/50.

The interface doesn’t take long to get used to, and you can copy and paste commands, change the order of commands, and edit already-entered commands for some fine turning. Baxter even has an I/O port for communication with other factory machinery. This allows Baxter to wait until another machine is ready or directly manipulate another machine, like a press or cutter.

The findings suggest that applicants from cultures that place greater emphasis on humility, including some Asian cultures, may have a harder time landing a job in North America.

“A job interview is one of the few social situations where narcissistic behaviours such as boasting actually create a positive impression,” says UBC Psychology Prof. Del Paulhus, the lead author of the study. “Normally, people are put off by such behaviour, especially over repeated exposure.”

Before placing participants in job interview scenarios, researchers used questionnaires to measure their levels of narcissism. The study found that people who rated as narcissists were viewed as more attractive job candidates.

Videotapes of the interviews were later scored by a team of raters. Narcissists tended to talk about themselves, make eye contact, joke around and ask the interviewers more questions. As a result, the study found that people rated narcissists as more attractive candidates for the position.

The researchers also found that participants of Japanese, Chinese and Korean heritage exhibited lower levels of narcissism, and were less likely to receive “definitely hire” ratings as a result. “The pro-narcissism bias results in an indirect cultural bias – particularly against East Asians,” says Paulhus.

Paulhus says the study offers important lessons for job candidates and interviewers alike. “Candidates should engage with the interviewer while continuing to self-promote,” he says. “Interviewers should look beyond cultural style and assess individual qualifications. Instead of superficial charm, interviewers must analyze candidates’ potential long-term fit in the organization.”