This week the world’s most popular social network acquired the teen-focused platform tbh, as in “to be honest,” for an undisclosed sum. (TechCrunch reported the purchase price was less than $100 million.)

tbh has generated a following among younger users with its unabashed embrace of positivity. The service lets users anonymously send compliments to their networks by responding to emoji-laden polls that ask questions such as, “Who makes you laugh the hardest?”

“When we set out to build tbh, we wanted to create a community that made us feel happier and more confident about ourselves. We felt that people craved genuine and positive interactions in their online experiences,” the company wrote in a blog post announcing its sale to Facebook.

Facebook is likely drawn to the platform’s popularity among younger demographics, which the aging social network is having some trouble with of late. eMarketer projects there will be more US Snapchat users than Facebook users in the 12-to-24-year-old demographic by the end of this year. 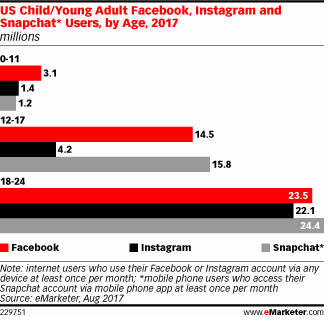 From social listening insight to email metrics, US marketers rely on a slew of data sources to inform their decisions. But less than 9% of those polled by mobile marketing provider Tune in March 2017 said they use a single system of record to bring all that data together. 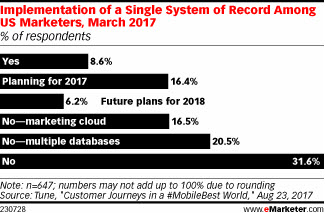 Instead, roughly 21% of respondents rely on multiple databases, and 16.5% use a marketing cloud service to house data.

Though not quite the same thing, a well-integrated marketing cloud could potentially serve more functions than a single system of record. It could not only bring data together, but also deliver actionable insights to marketers and operationalize them through email marketing, social media and other channels.

Tapping brick-and-mortar network for an edge

The head of ecommerce for Walmart, Marc Lore, acknowledges that the company has work to do to catch up with Amazon in some respects, but that doesn’t mean Amazon has the advantage in every digital matchup.

Lore said Walmart’s more than 1.2 million employees in the US, as well as its more than 4,600 stores located within 10 miles of 90% of the US population, are among its “unique assets.” They give Walmart advantages, he said, such as the ability to offer online ordering for grocery pickup, currently available in 1,000 stores. 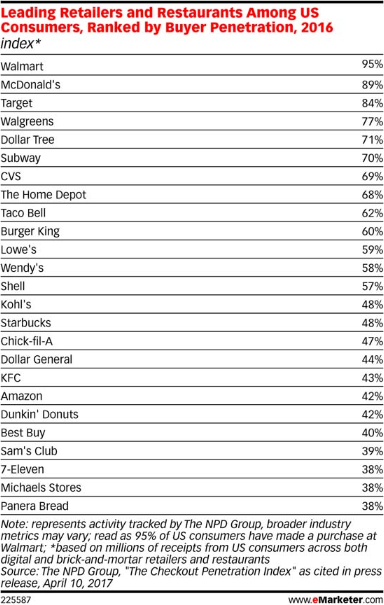 The comments came only days after the company announced its partnership with smart-lock startup August Home to test delivering fresh produce straight to customers’ refrigerators.

As Amazon continues to expand into various areas of consumers’ lives and reshapes how people shop via its successful Alexa-powered voice assistants like the Echo devices, Walmart is partnering with Google to offer a feature where consumers can shop for Walmart items via Google Assistant voice shopping. The partnership also involves Walmart integrating its “Easy Reorder” feature to Google Express so Google can recommend a personalized weekly shopping list based on consumers’ prior purchase history.

How this deal came about also highlights the importance of the partnership for Google. In fact, Google was the one that approached Walmart first about the partnership.

“It’s been a perfect partnership,” Lore said. “We are a retailer. We don’t claim to be a tech company. … Google has more tech prowess. We are looking through the lens of how we can be the best merchant in the world. … The two of us are stronger than anyone alone.”

Kohl’s announced on Tuesday that it will accept Amazon returns at 82 of its locations in and around Los Angeles and Chicago starting next month.

There will even be designated parking spots near entrances designated for people coming to return Amazon goods.

Post-millennials have grown up in a perma-crisis. Financial meltdown followed by endless austerity, climate change beyond the point of no return, the failure of the establishment, separatism, extremism, terror, globalisation and, of late, the threat of nuclear war thrown in for good measure.

And then we, their parents, fuss over stair gates, organic food and car seats so they can survive in this dangerous world.

The effect has been to undermine what it means to be a teenager. The DNA of a 16-year-old is programmed to take risks and behave irresponsibly, but not for a post-millennial. We have produced a generation of middle-aged teenagers. They drink 40% less than we did in the 1980s and have halved their intake of drugs – apart from Ritalin, which is up by a third as it helps them concentrate at school.

The phrase “noble purpose” was coined by David Packard in 1947 – the idea that a company should fulfil a role in society over and above making money. This notion appeals hugely to millennials, with their idealism, optimism and desire to create a better world. Everything and everyone should have a social purpose. But when toilet cleaners exist to save the whale and chocolate bars claim to address social inclusion, post-millennials will call foul.

Post-millennials will want their brands, companies and institutions to be to the point. To be realistic. They will strip away the wheat from the chaff, because they are pragmatic and down to earth. For them, the Pepsi ad wasn’t just crass but missed the point: “Tell me you are good at what you do and why – and, if you must have a purpose, keep it close to home.”

Amid a sea of advertising offering predictable, bland humour, I love the sharp edge to these ads. It’s a risk that worked.

Campaign had dinner last week with the new team at Bartle Bogle Hegarty.

Table talk over dinner turned to the newer entrants into the ad industry and how likely they were to hang around in the business for the long haul. Will any agency in the future be able to boast that its chief executive joined as a graduate trainee 25 years ago? Or will businesses be forced to accept that travelling the world, or spending a few years volunteering, or working part-time in advertising while teaching yoga or DJ-ing, will take precedence over a career-for-life approach?

If you imagine young employees will feel anything like the same corporate (or even industry) loyalty that their predecessors do and will be prepared to make similar compromises on behalf of their employer, then look out for this issue’s feature, The Stress Report.

Apparently, Generation Z will demand that their work is an opportunity for self-discovery and self-development. AppNexus chief people officer Brandon Atkinson reckons there’s a greater expectation from young staff that their employers should “invest in their whole selves”. A big salary (and, anyway, let’s face it, probably not one as big as their predecessors commanded) just won’t cut it any more.

Most decent companies in our business aren’t bad at some of this softer stuff, but it’s often as much a sop for all the late nights, weekend working and curtailed holidays as it is recognition of a fundamental shift in the relationship young staff expect to have with their work.

And if all the late nights and weekend working and curtailed holidays get too much, then chances are Gen Z will dip into their “fuck off fund”. Not necessarily a stash of cash, the fuck off fund is just as likely to be a portfolio of skills that mean they can go off and earn money as a photographer or selling jewellery or writing a blog for a while.

We’re a very long way from working out what all this means for company cultures, for marketer/agency relationships, for always-on communications, for our timesheet-driven service culture, for staff training and development, and for our professional communities. While our industry is still led by people who have advertising in their blood, none of this matters much. But it will – and sooner than you probably think

For “Generation Selfie”, beauty is not skin-deep but as deep as a multitude of digital surfaces. When consumers are comfortable adopting multiple digital personas, the notion that “beauty is only skin deep” is being challenged by Molton Brown. The luxury brand, which makes 35% of its sales during the Christmas period, is offering this generation a unique blend of sensory-driven escapism.

As Molton Brown’s global vice-president of marketing, Beatrice Descorps is at the forefront of the reimagining of aspirational beauty in the digital age. The beauty market in recent years has focused on people’s need to be, as she calls it, “selfie-ready”. But there is now a shift, with beauty no longer existing within the confines of the screen. She says: “In a few years’ time, beauty will not be about how you look – it will be much more about well-being; it will be more sensorial.

Beauty will not be about how perfect the canvas is – it will be more about how you feel.

Sensory stimulation is clearly top of the agenda at Molton Brown’s heavily scented Regent Street store, which has all the hallmarks of a retailer in the key pre-Christmas sales period. The signs are everywhere: from the wash-basin centrepiece where consumers can try products to the background music, from visual merchandising to luxurious packaging. The shop’s window display is designed to transport visitors to Laponia – where Molton Brown’s new festive Fabled Juniper Berries & Lapp Pine range and the store’s scent originate from.

Translating this sense of occasion and theatre, and the myriad of rituals that have built the brand in-store, into online spaces is a significant focus for Molton Brown. “Three years ago when I first joined the brand, we had a very transactional site. Now we are focused on not only having a very seamless customer experience but ensuring that the human experience is right,” Descorps says.

In practical terms, this has included introducing 24/7 online customer service (manned by real people as opposed to a chatbot) and revolutionising the online delivery process. The changes have even extended to teaching the online delivery team how to tie the Molton Brown knot on its signature brown bags. It’s an investment that reflects an attention to detail: packaging that signifies luxury and indulgence is often neglected in the online delivery.

In an era when consumers feel overloaded with images and information. Victoria Buchanan, trends analyst at The Future Laboratory, says we are living in an age of dulled senses. She says: “Constantly bombarded with images on screens and the hub of never-ending information that is the internet, people are beginning  to forget how to feel. In our quest to reconnect with our senses and our bodies – to be our optimal selves – we are also seeking blissful altered states, with consumers yearning for heightened sensory environments.”

When people think of Staples, they often think of the office supplies retailer’s consumer-facing business. A go-to source during the back-to-school season, Staples sells everything from notebooks and pens to printers and ink cartridges.

But at Retail Big Show in New York, the National Retail Federation’s annual convention and expo, Staples’ head of growth and applied innovation Ryan Bartley said the company has a B2B component, too—one that offers print and marketing services to Fortune 100 giants and small and mid-sized businesses, alike.

Now, the retailer is introducing an easier way for B2B customers to order what they need when they need it—a concept it developed by partnering with IBM Watson and putting a new spin on an old marketing shtick: the Easy Button.