And Other Stories teamed up with New York based information designer Giorgia Lupi to launch it’s newest co-lab that turns data visualizations into wearable stories. 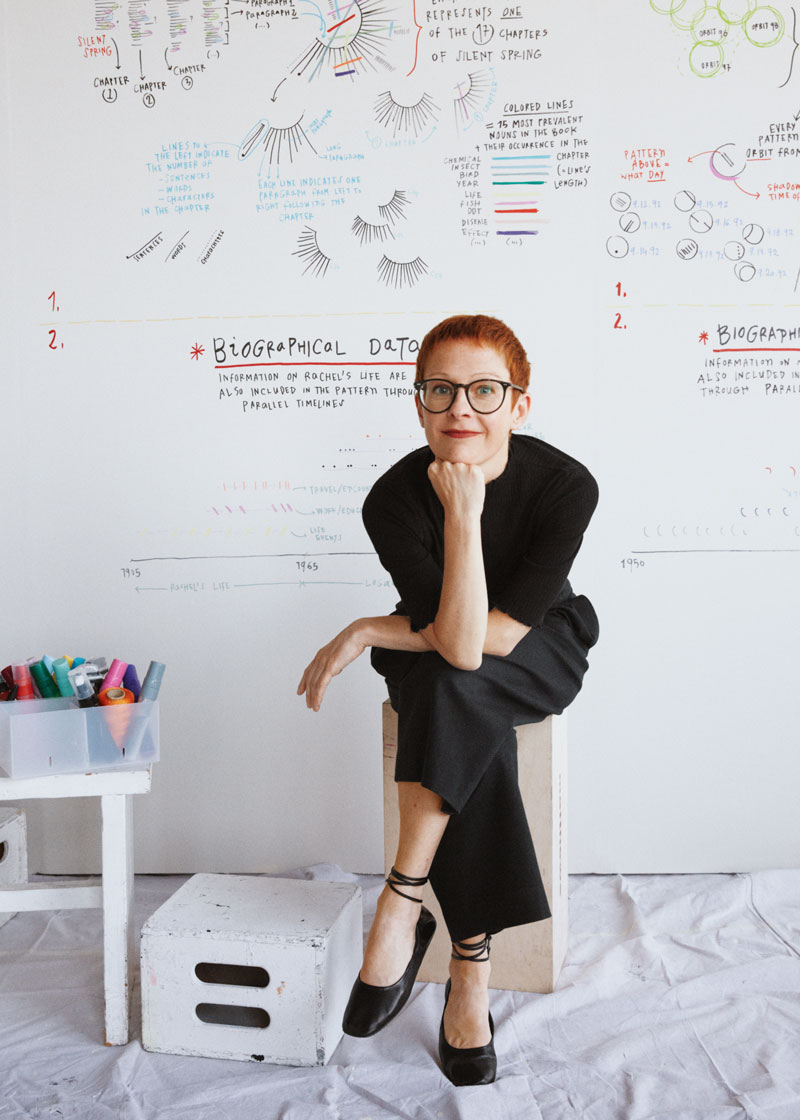 Lupi is known around the world for her singular, artful approach to data: Instead of relying on hollow charts and graphs, she creates beautiful hand-drawn prints that lend a “human” touch to sterile numbers and statistics.

“As human beings, we have no use for seeing raw data in an Excel sheet, because we can’t detect the patterns. It’s only through design and visualization that we can access that knowledge.” 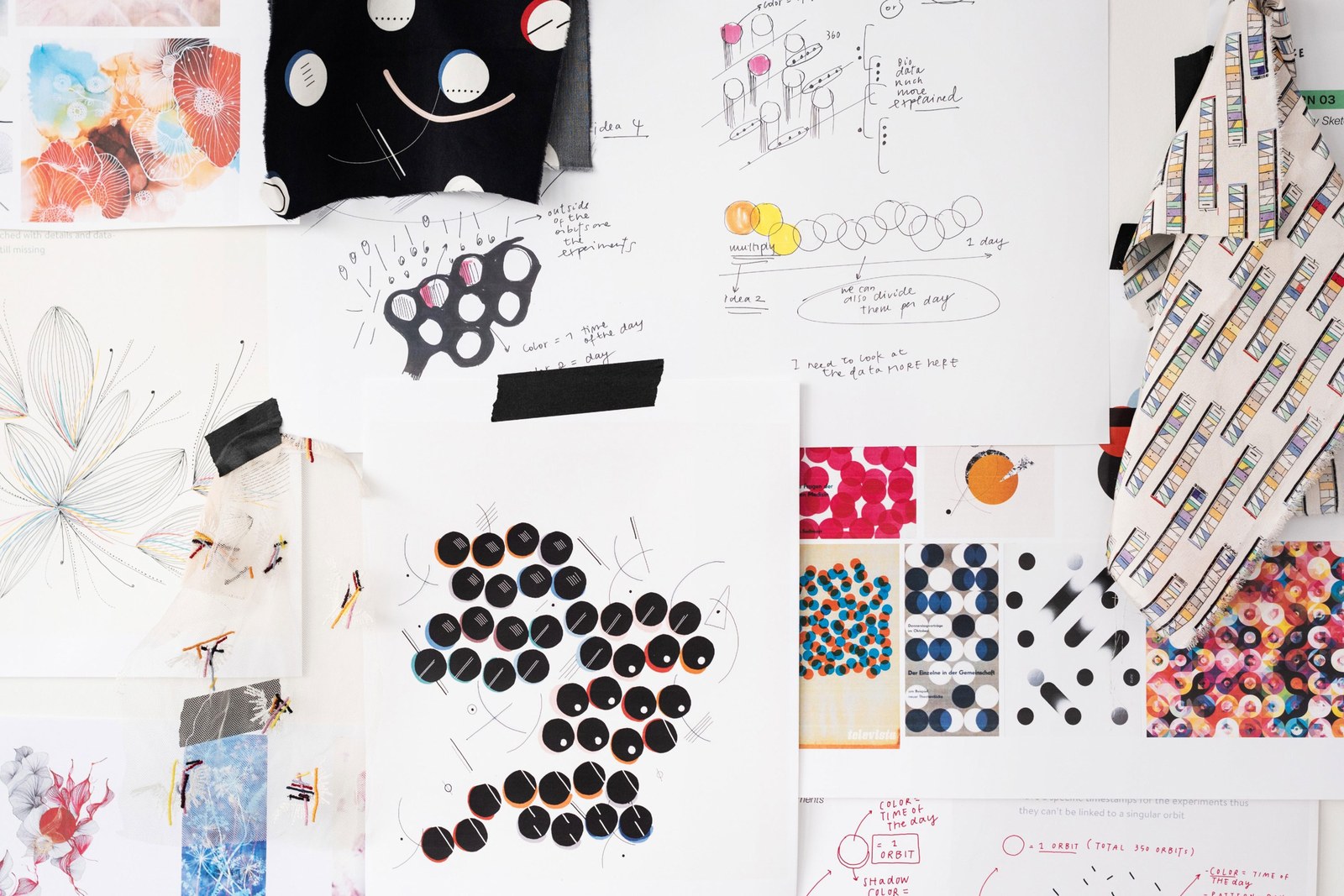 Through her unexpected take on storytelling, a visually compelling collection of hand-drawn prints reveals the achievements of three female science trailblazers. Ada Lovelace, who wrote the first computer program in the mid-1800s; Rachel Carson, who started the environmentalist movement with her 1962 book Silent Spring; and Mae Jemison, the first African American woman to travel to space in 1992.

“They were pioneers in fields that were historically male-dominated,” Lupi says. “But I wanted to focus on their significant accomplishments, not necessarily just on their lives as women. Sometimes it’s easier to focus on the obstacles they overcame, but to be really aspirational, I think it’s important to look at the contributions they brought to the world.”

Recognized as a pioneer for the discipline of computer science, Ada Lovelace used her gift for mathematics to translate and write instructions, imagining how to program a machine to do complex calculations” 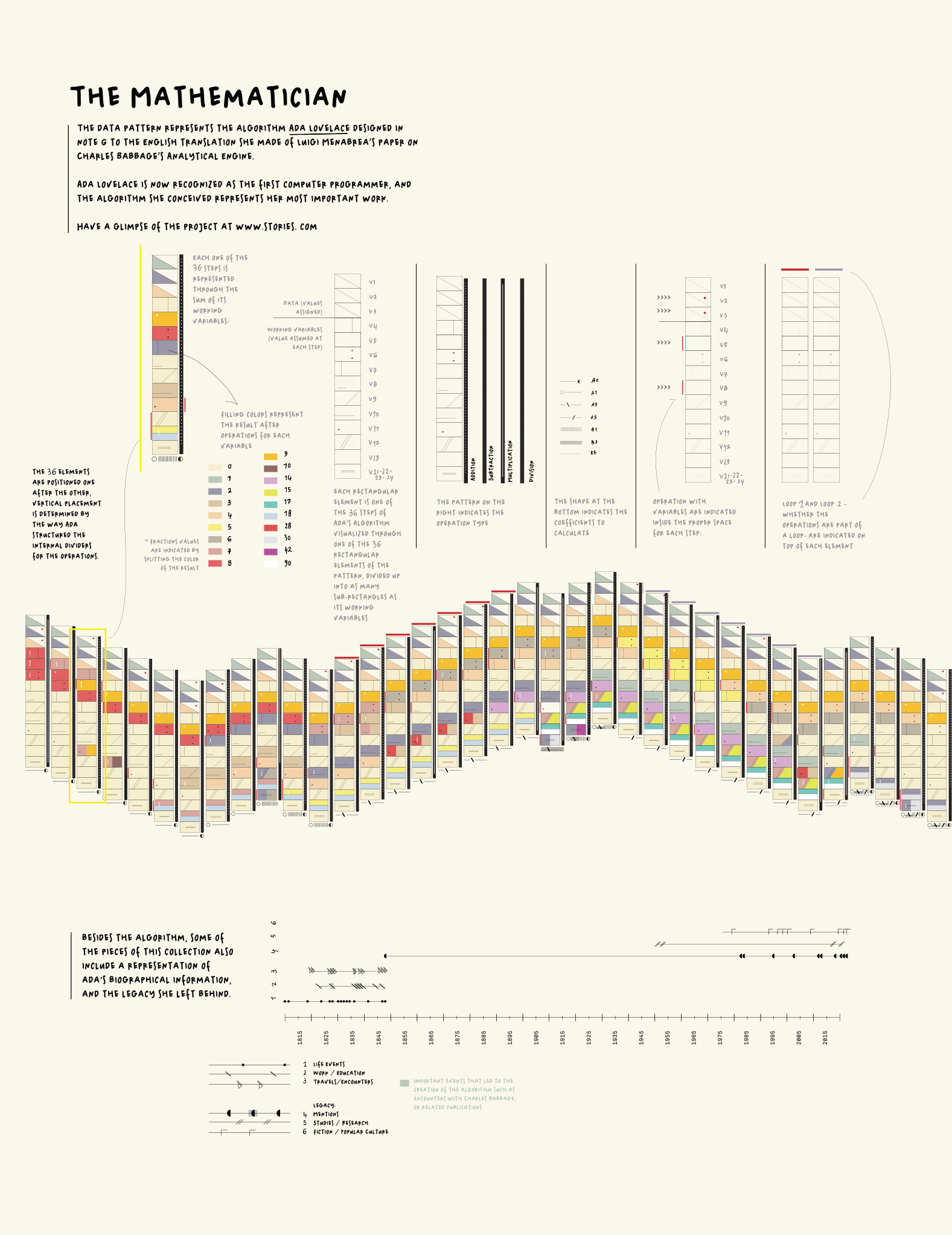 “For Ada’s design, we created a colourful geometric pattern that analysed the mathematical structure of the algorithm she wrote.” 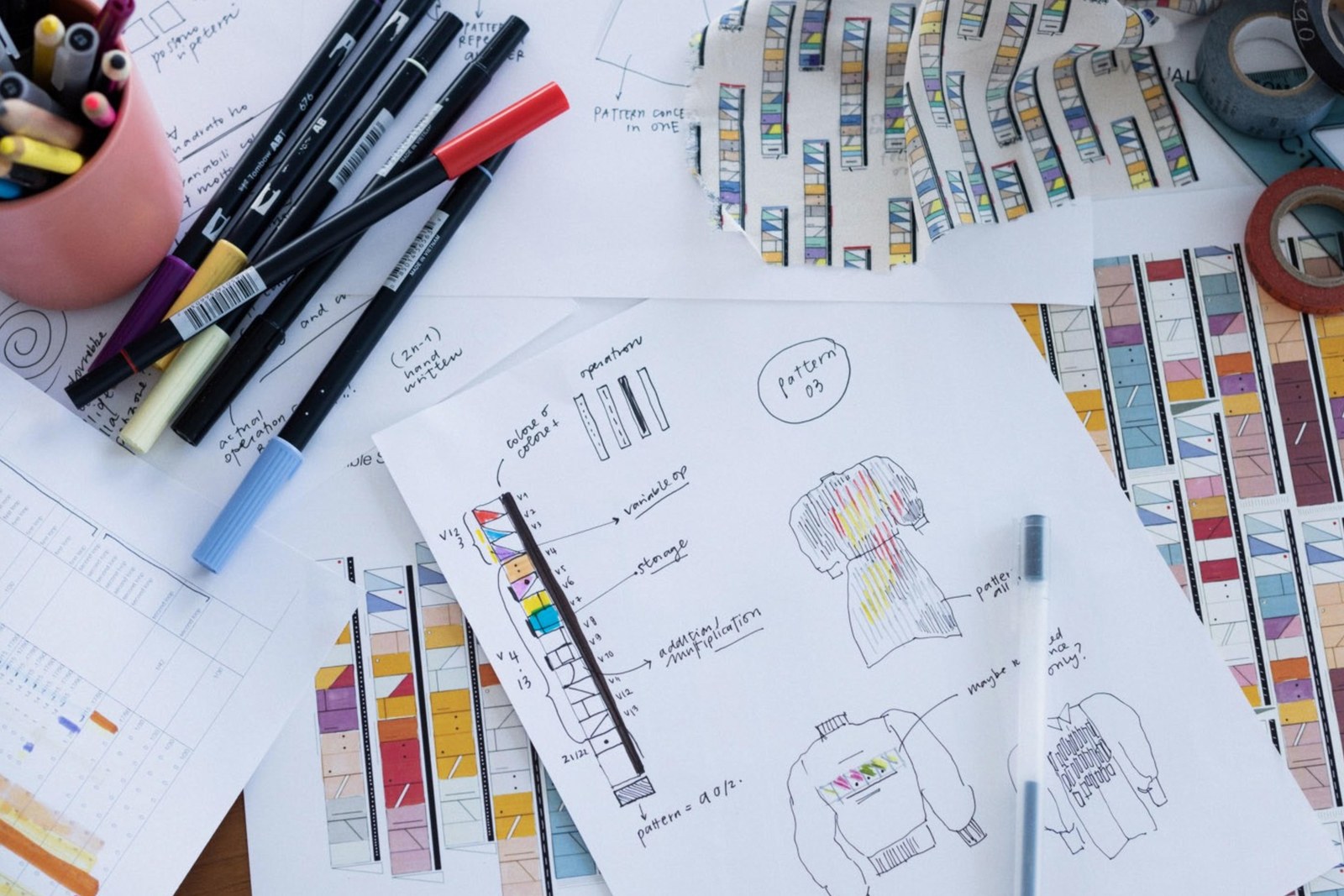 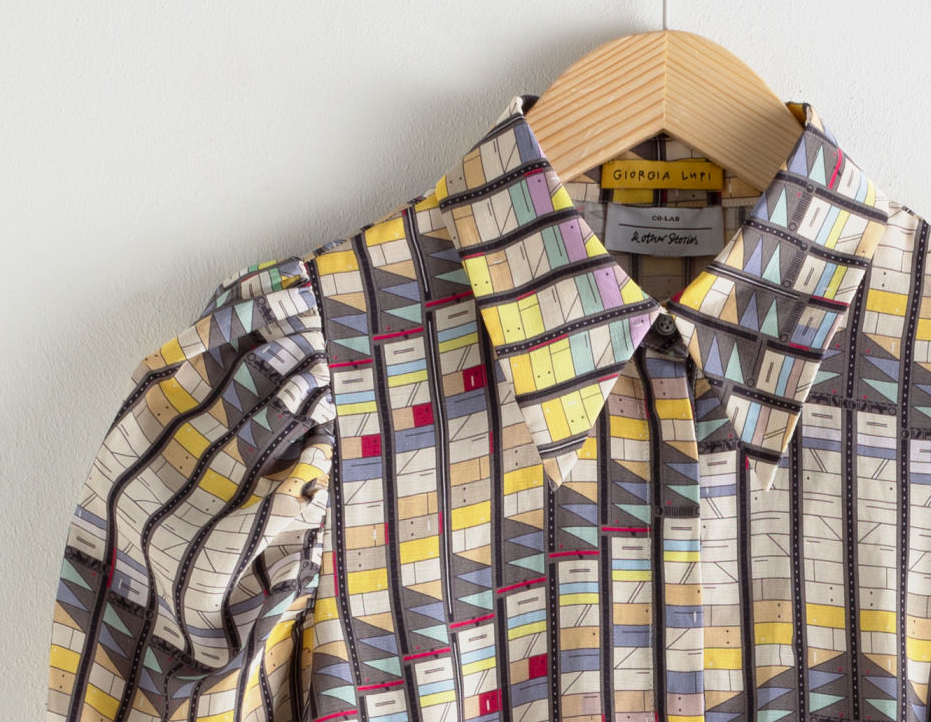 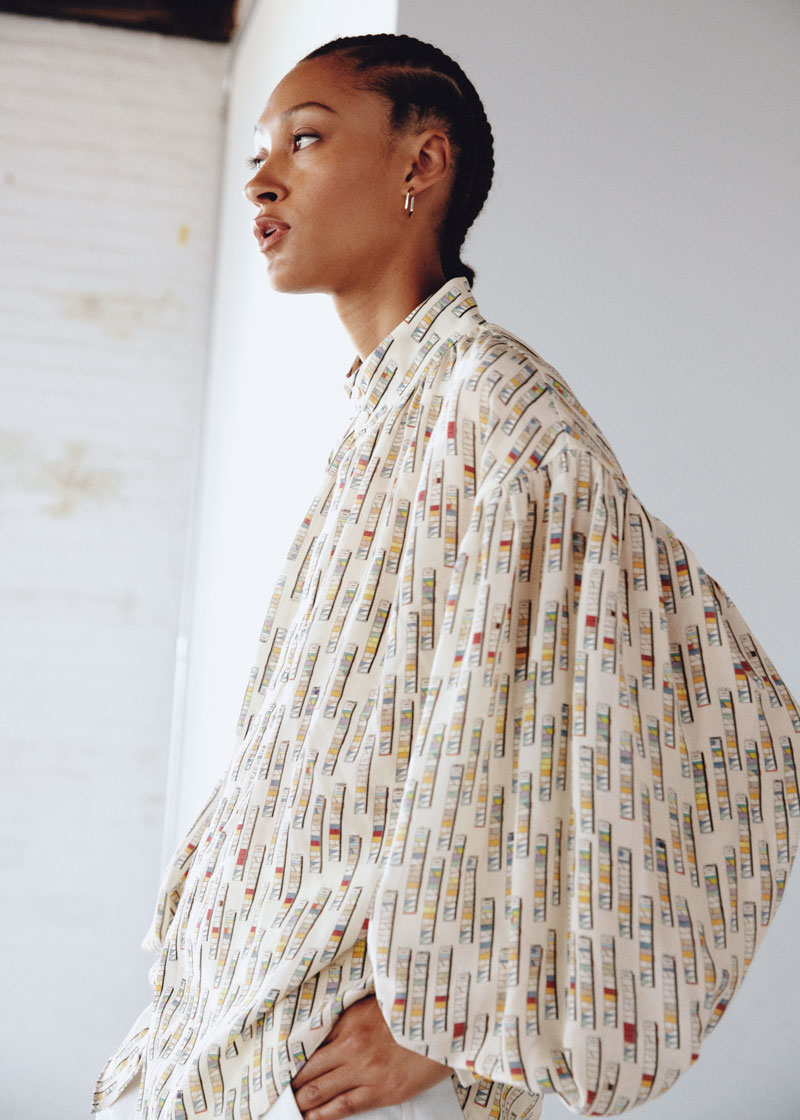 A true polymath and NASA astronaut, Mae Jemison’s accomplishments include participating in the STS-47 lower orbit mission, an achievement that established her as the first woman of colour in space. 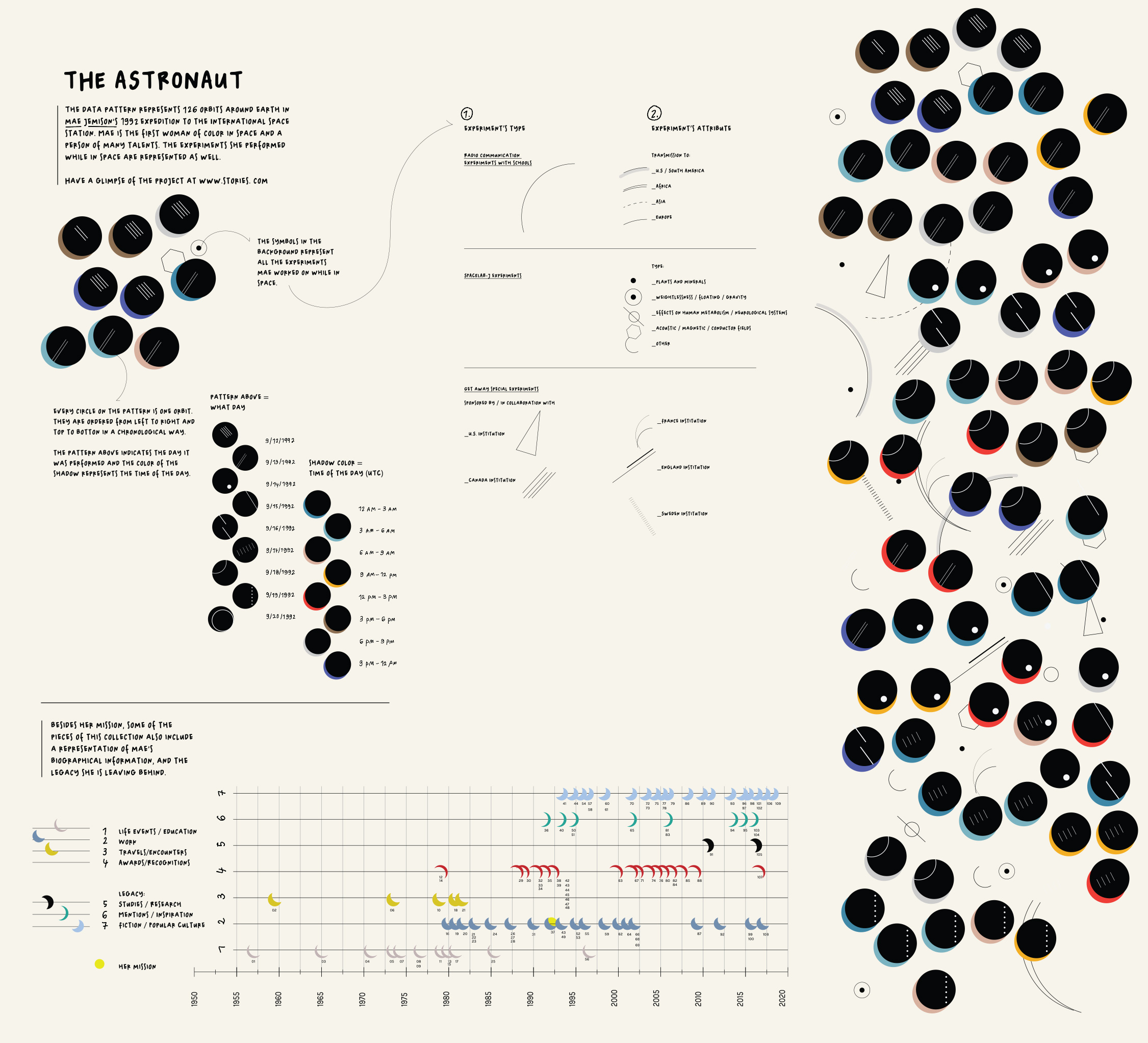 “The pattern is based on her orbits and experiments that she conducted in space. As a memory of her mission, the visual represents the days she was in space and how she might have viewed her surroundings as well as the many experiments she performed.” 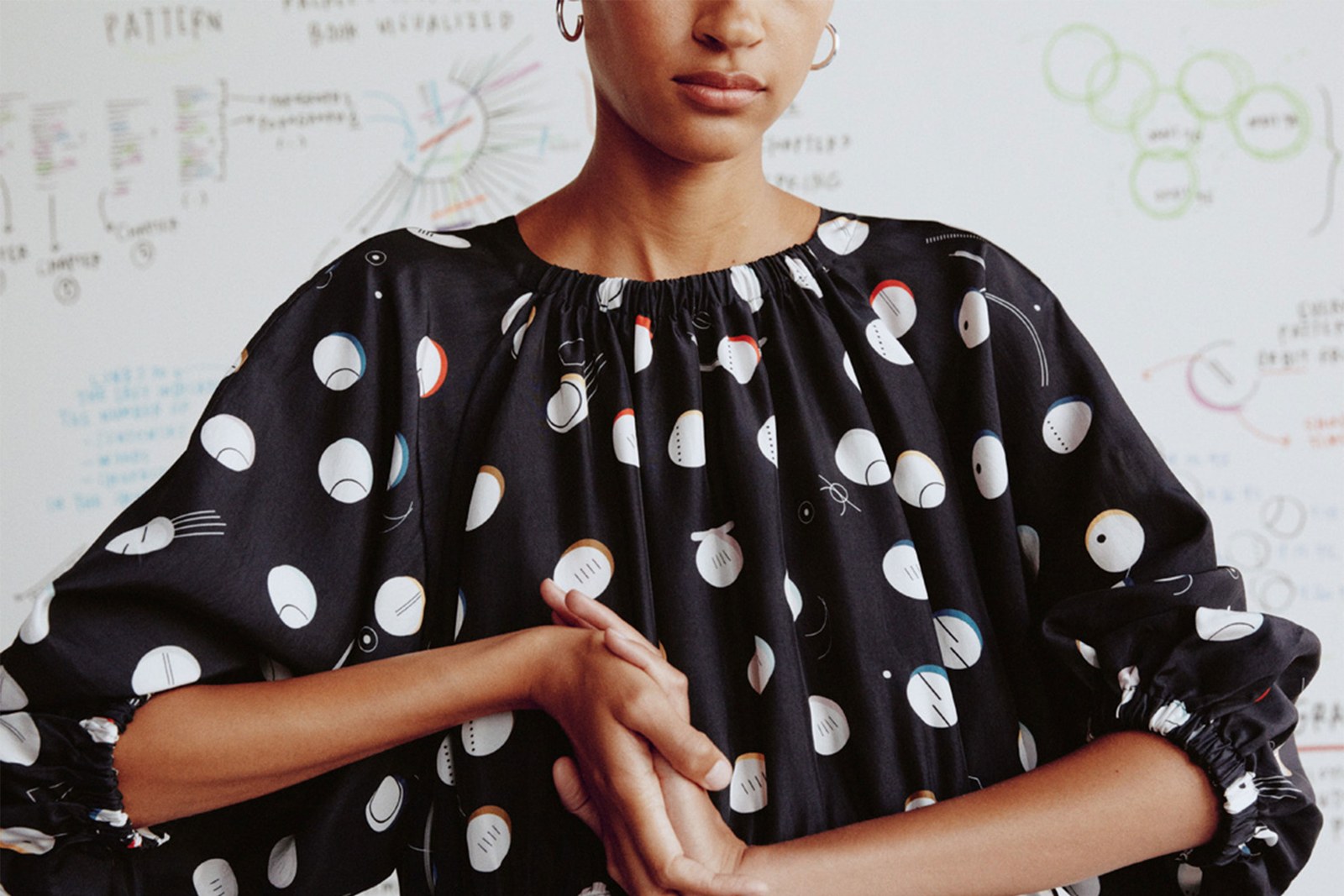 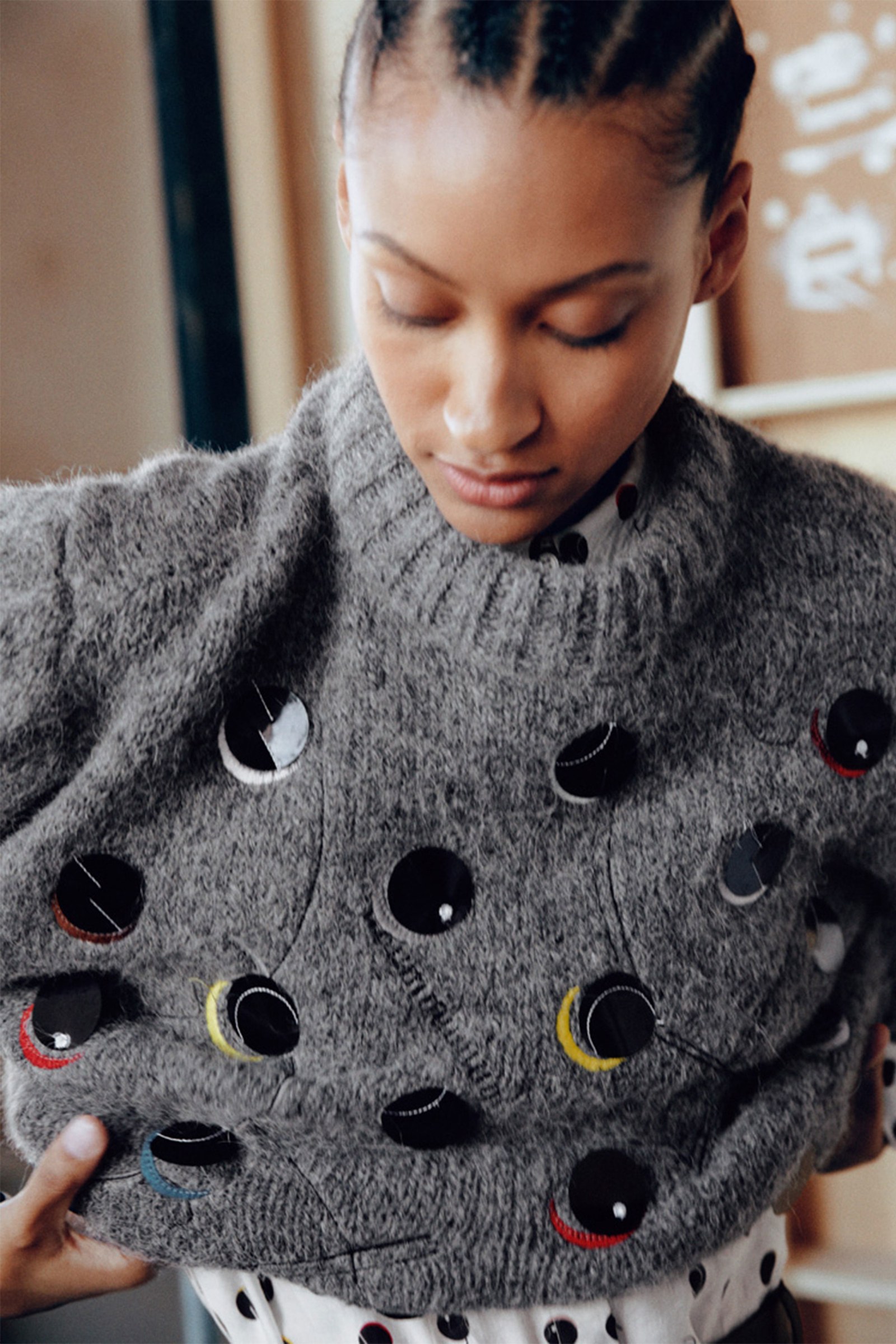 The author, environmentalist, and activist is best known for her book, Silent Spring, which is considered the first contribution to literature from a conservationist perspective and helped to launch the environmental movement. 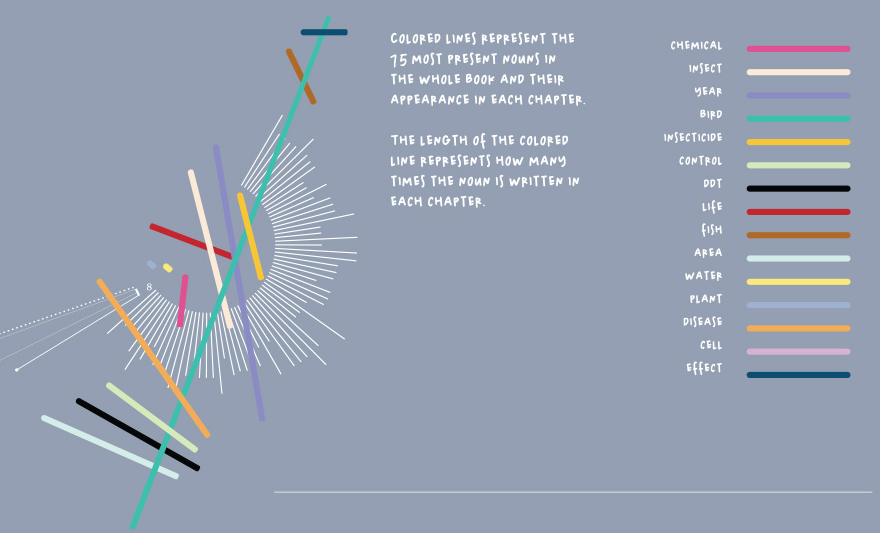 “Through different techniques on the garment, such as embroidery and colour codes, we visualise the structural and semantical analysis of her work, Silent Spring.” 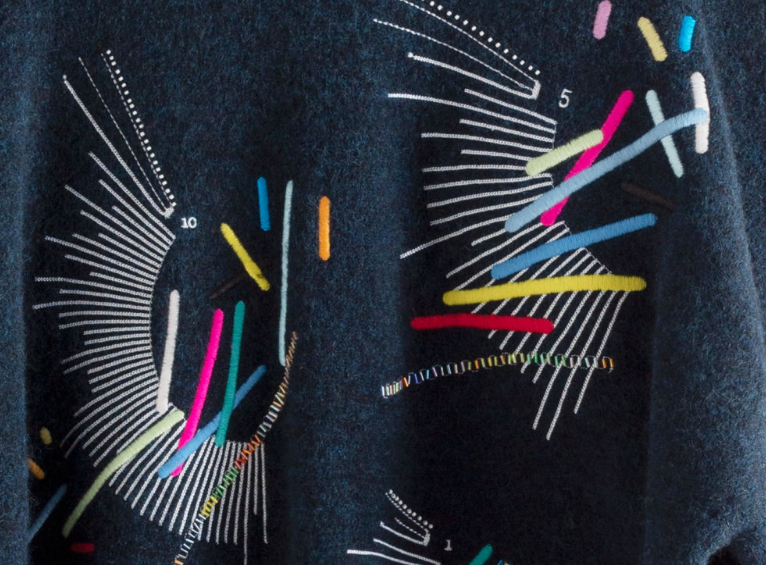 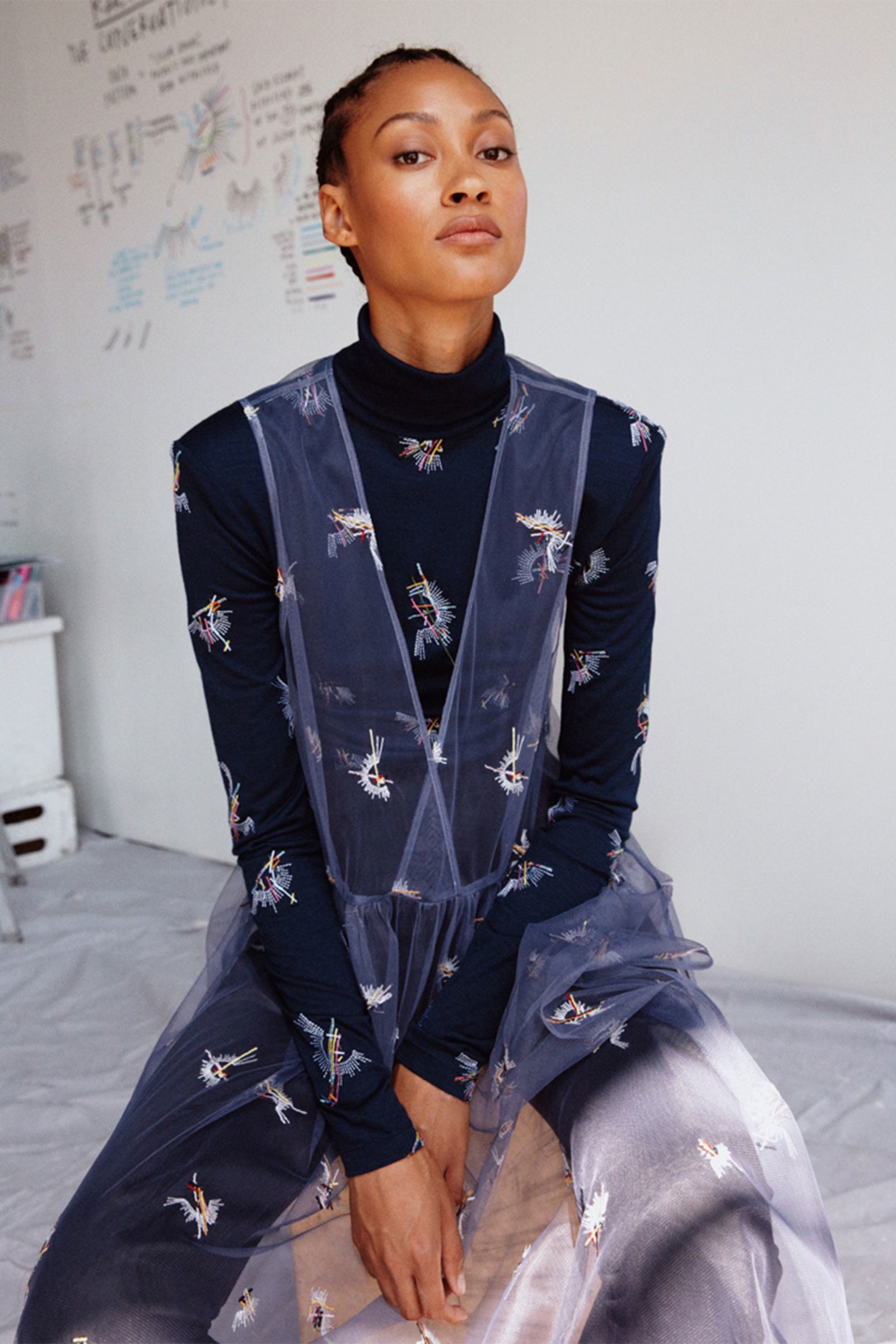 I posted this because I design surface prints and data visualization and I think it’s sick.

It’s hot because as inauthentic and disconnected influencer partnerships have flooded the market, it’s exceedingly rare to see a truly innovative and unique collab. This was a smart partnership with a resulting collection that feels thoughtful and authentic the brand and artist.

The tech industry is banking on artificial intelligence like Siri, Alexa and OK Google becoming ubiquitous. Voice assistants are notorious for misinterpreting local accents, but many overlook that this extends to people with disabilities.

Voice recognition algorithms are built from libraries of standard pronunciations and speech patterns, so people who have difficulties with speech or enunciation also have trouble accessing these technologies. And because they may have physical disabilities as well, these are often the very people voice assistants could help the most.

Because of their unique speech patterns, voice technology doesn’t understand people with Down syndrome. Out of the box, Google’s voice assistant misunderstands about every third word from an average speaker with Down syndrome. This is due to a large lack of training data.

Project Understood aims to improve Google’s algorithms by building out the database of voices. The Canadian Down Syndrome Society is working with Google to collect voice samples from the adult Down syndrome community to create a database that can help train Google’s technology to better understand people with Down syndrome. The more voice samples we have, the more likely Google will be able to eventually improve speech recognition for everyone.

Spots from FCB Canada follow Matt MacNeil, a Canadian with Down syndrome who works with CDSS, as he travels to Google headquarters in Mountain View, California, to work with Google engineers and product managers to refine the voice recognition tools.

Why it’s hot: We’ve seen the repercussions of a lack of diversity in advertising and tech, from alienating workplaces to tone deaf creative. But there remains much to explore and address. As artificial intelligence becomes more ubiquitous, the design of relationships between humans and machines carries exciting opportunity to help people in meaningful ways, and more serious implications to getting it wrong. Overlooking people with disabilities is a glaring misstep that is part of a larger problem – we can’t design inclusive experiences from a single perspective. We need to develop new design frameworks, blended skillsets, diversity of thought and ethical systems of governance for building empathy into technology. 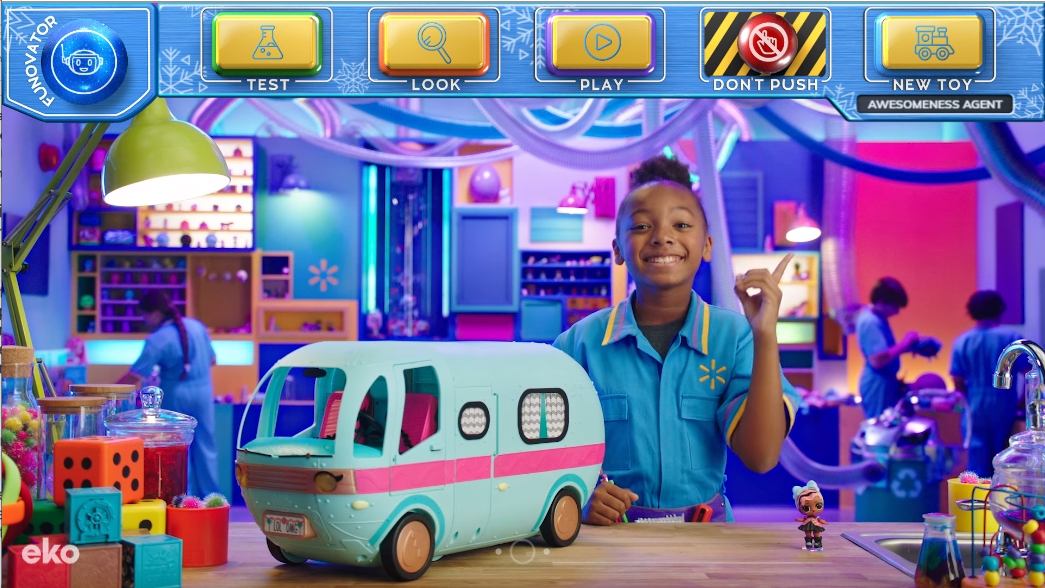 At KidHQ, kids are given the chance to become “toy testers” and help find out which of this season’s hottest toys are the most fun to play with. Using eko’s patented, live-action video technology, they use the “Funtroller” to explore and play. Kids can also embark on a magical adventure using the “Funovator” to explore “floors,” meet Santa, interact with live-action and animated characters, help to build a vlog with Barbie and more. 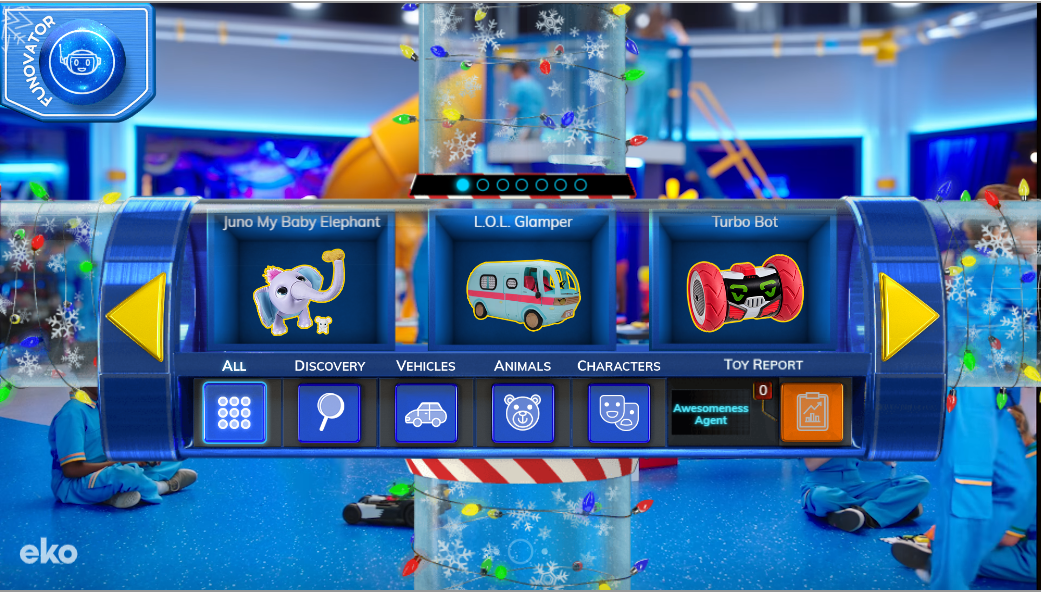 Accessible from a phone, tablet or computer, viewers click or tap prompts that appear on the screen to choose what happens and where to go next. eko’s technology provides uninterrupted interactive video the entire time, so choices are seamless and feel like a wish come true to kids and adults alike. Designed as a safe, open and COPPA-compliant experience for kids, KidHQ proves why eko’s technology is the new way for brands to connect with audiences online. 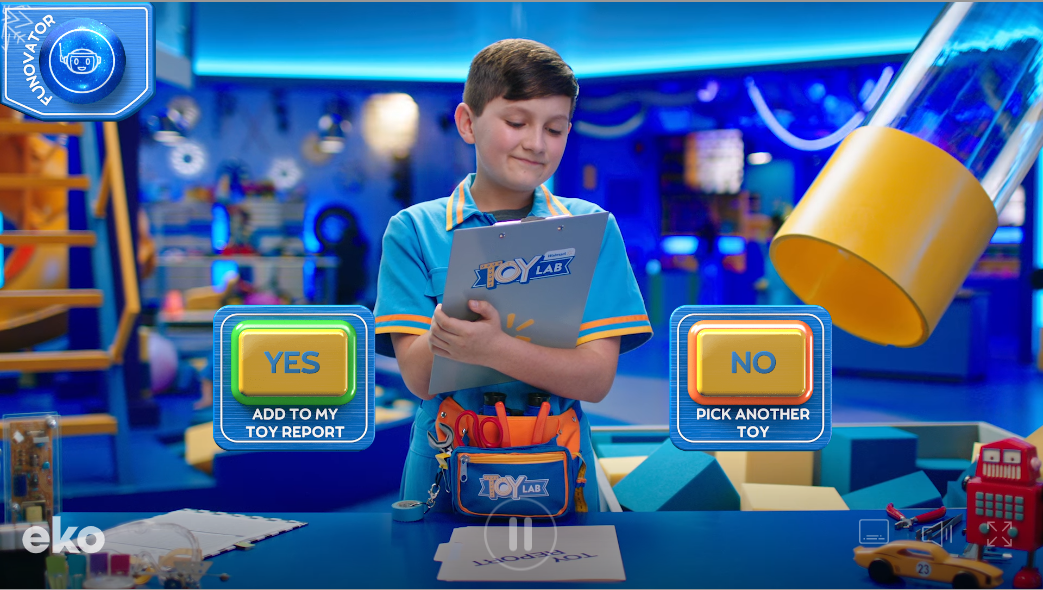 At the end of the experience, kids can share their “Toy Report,” a wish list that helps parents discover what their kids want for the holidays. In a special “Grown Up Only” floor in KidHQ, the Toy Report becomes a seamless click-to-shop experience for parents powered by eko’s relationship with Walmart.

About ekoeko is an interactive entertainment company that lets audiences affect, control, and influence interactive entertainment. The company provides a platform for interactive stories and partners with media companies, independent creators and top brands to create engaging experiences for audiences. Stories are distributed through Helloeko.com, affiliate partners, and social networks; available on desktop, mobile, and connected devices. The company has over 15 patents for its technology, including its proprietary player and authoring tools. eko Studio, the company’s suite of authoring tools, is also offered for free to a community of creators who craft their own interactive experiences using eko’s platform. 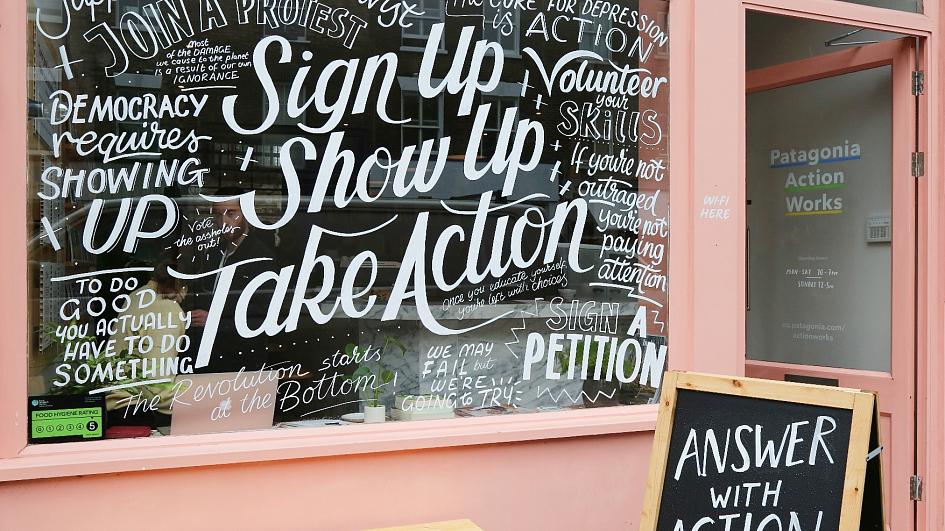 Patagonia is spearheading a movement to fight back against climate crisis. The company has opened a cafe in London’s Broadway Market, to connect people who want to take climate action but aren’t equipped with the tools.

Within this space for grassroots environmental activism, like-minded individuals have the option to receive activist training, develop their campaigning skills and access a resource library to learn how they can make a difference in the face of the climate crisis.100% of coffee profits are donated to local UK environmental NGOs and charities. 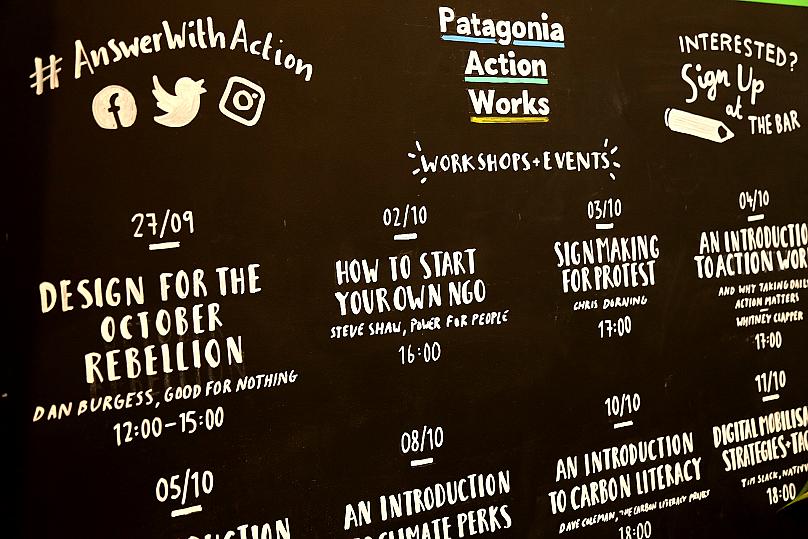 The cafe is a physical outpost of the company’s Action Works initiative, an online platform that allows users to sign petitions, discover local events, donate money to nearby causes and offer their time and skills for volunteering. The platform initially launched in North America and attracted half a million people in supporting environmental issues; the launch has now become Europe-wide.

Why it’s hot: This is a great way for the brand to engage with and add value to urban spaces, in a way that is authentic and true to Patagonia’s 45-year history of activism.

In the words of  Ryan Gellert, EMEA General Manager for Patagonia:

“the urgency of the climate crisis means it’s everyone’s responsibility to act now. Businesses have the money, power and voice to play a major role in saving our home planet – as well as in ensuring that they are not making our environmental problems worse.” 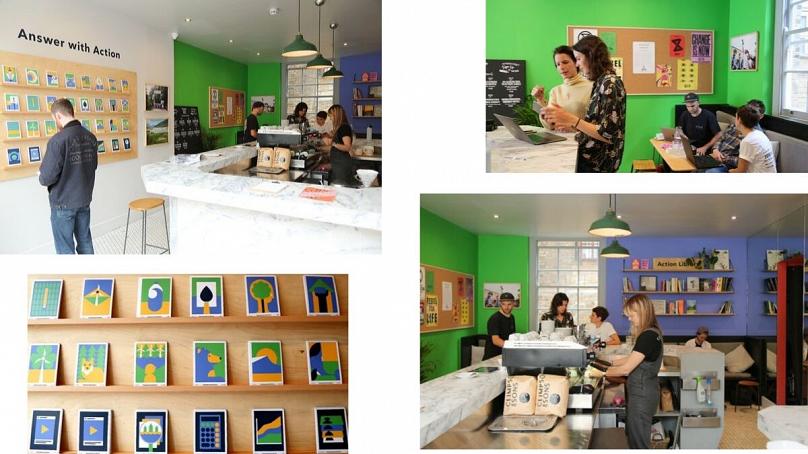 As soon as you enter the café there is a range of 24 ‘Action Postcards’ that you can choose from that advise you on how to get involved in climate activism. You can take these cards with you and the different actions you can get involved in depend on the time you can devote to them. These range from advising you on how to ‘Become Carbon Literate’, to ‘Save the Right Whale from extinction’. There are also eight skill cards which offer opportunities to activists to provide skilled volunteering to a range of NGOs in areas such as photography and accountancy. 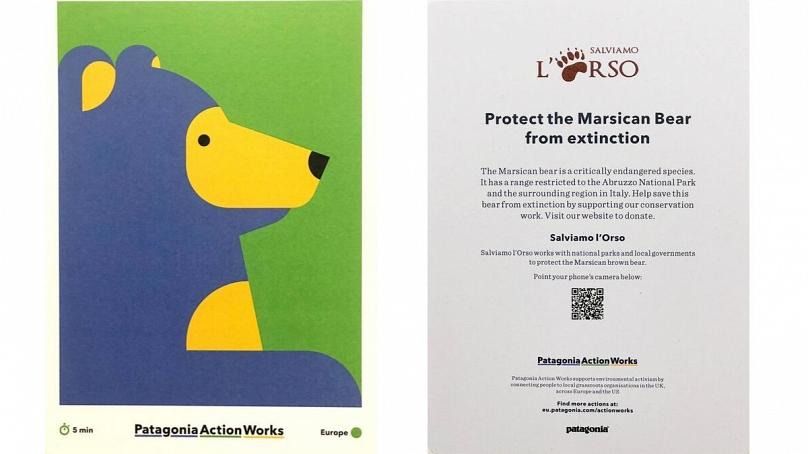 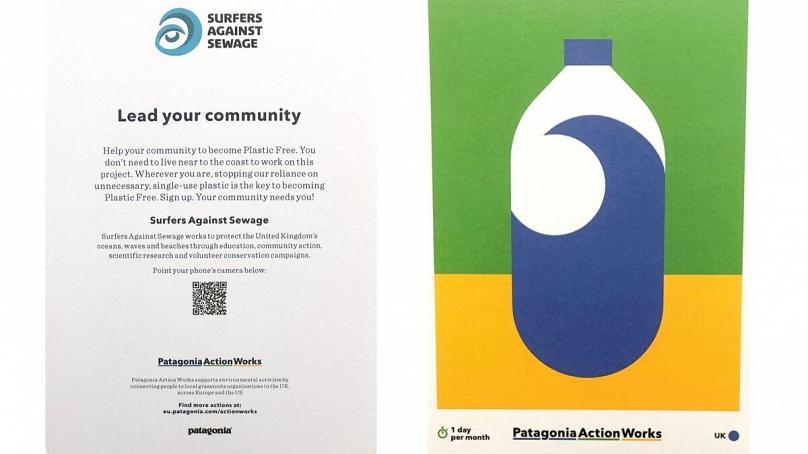 Books written by leaders and experts are around the café to help you get into the mind of an activist and inspire you to take action. Outside of the walls of the café there are also environmental groups who are there to help you engage in climate action. Sign up to workshops, discussions and free activities to educate yourself on how to tackle the climate crisis. Or simply go along to have a chat about the environment with people who are care about the planet.

The real thing I want to discuss

The Greta Thunberg helpline: for adults angry at a child. A smart way to comment on the madness.

Hang in there! Help is available. https://t.co/aenieXxVut

Why it’s hot: Social impact work doesn’t need to be earnest. Comedic elements can work if they honor the intent of the organization and message.

Like this satirical video game from the Brady Center to Prevent Gun Violence. Players are U.S. representatives trying to avoid pressure from the gun lobby. If they make it to the Capital to sign gun legislation, they receive a message: “Congratulations! You did your job. Now send this game to a member of Congress and tell them to do theirs.”

Taking aim at elected officials who placed part of the blame on the “glorification of violence” (like video games) in society following recent mass shootings, the game proposes that if violent video games can cause gun violence, then a video game can also end gun violence.