An Israeli agency (BBR Saatchi & Saatchi) made a short film titled “My New Face,” where they had Amit uses a Life M6 razorblade to shave off his beard. Then they filmed the reactions of his family – including his children, who have never seen their father without a beard.

The idea for the film originated with an agency staffer who recalled that as a child, he did not immediately recognize his father after he shaved off his trademark beard.

I thought this was an excellent use of pathos. The film was funny and touching, and unlike any razorblade ad I’ve seen from companies like Gillette. The film is not trying to sell you a product, it’s offering you the chance to transform yourself. As Gianatasio states in the article, “the film does a fine job of boosting the brand by transforming a basic consumer good into an almost mystical agent of change.”

The difference between humans and machines is that humans have feelings, they can “read” other people, they understand social cues (for the most part). These are such viscerally, exclusively human experiences – but maybe not for much longer. The IBM Watson Tone Analyzer can do what we thought only humans could do: analyze a text and judge the tone.

Building on similar linguistic analyses that power IBM Watson Personality Insights, Tone Analyzer analyzes given text and provides insights about the emotional, social and writing tones reflected in that text. It is only available in experimental mode as of now, but it essentially works as a sort of Google Translator for emotions. You copy and paste a body of text and the Analyzer will x-ray and evaluate the words using three “dimensions” outlined below:

Emotional Tone: Many psychology models exist in literature to capture human emotions such as anger, fear, anticipation, surprise, joy, sadness, trust, and disgust. We have developed a model for inferring emotions from written text. Tone Analyzer captures the salient three among these that we found to be relevant for Tone analysis based on our user studies. These include: cheerfulness, negative emotions and anger. Cheerfulness refers to positive emotions such as joy, optimism, contentment, inspiration, and happiness. Negative emotions include feelings of fear, disgust, despair, guilt, rejection, and humiliation. Anger is a type of negative feeling with strong intensity such as annoyance, hostility, aggression, hurt, frustration and rage.

Writing Style/Tone: Writing tone provides feedback on how analytical, confident and tentative one’s writing is. Analytical tone shows a person’s reasoning and analytical attitude about things. Confidence tone indicates the degree of certainty exhibited by an individual towards something. Tentative tone shows the attitude of inhibition.

This is the kind of technology I could only imagine existing in sci-fi movies, and I always feel like society is just advancing toward an era not unlike that of The Matrix (Why else would iPhones be getting incrementally larger with each new version? It’s because one day they will be human-sized, and suddenly you aren’t using your iPhone, your iPhone is using you).

My paranoia aside, the Analyzer can be used for things like market research and business communications. And not only does it analyze the tone of your writing, it gives you suggestions on how to improve it.

Yes. A computer can to tell you, a human, how to improve your writing.

As an experiment, I tested out the IBM Watson Tone Analyzer on my “Why It’s Hot” paragraph: 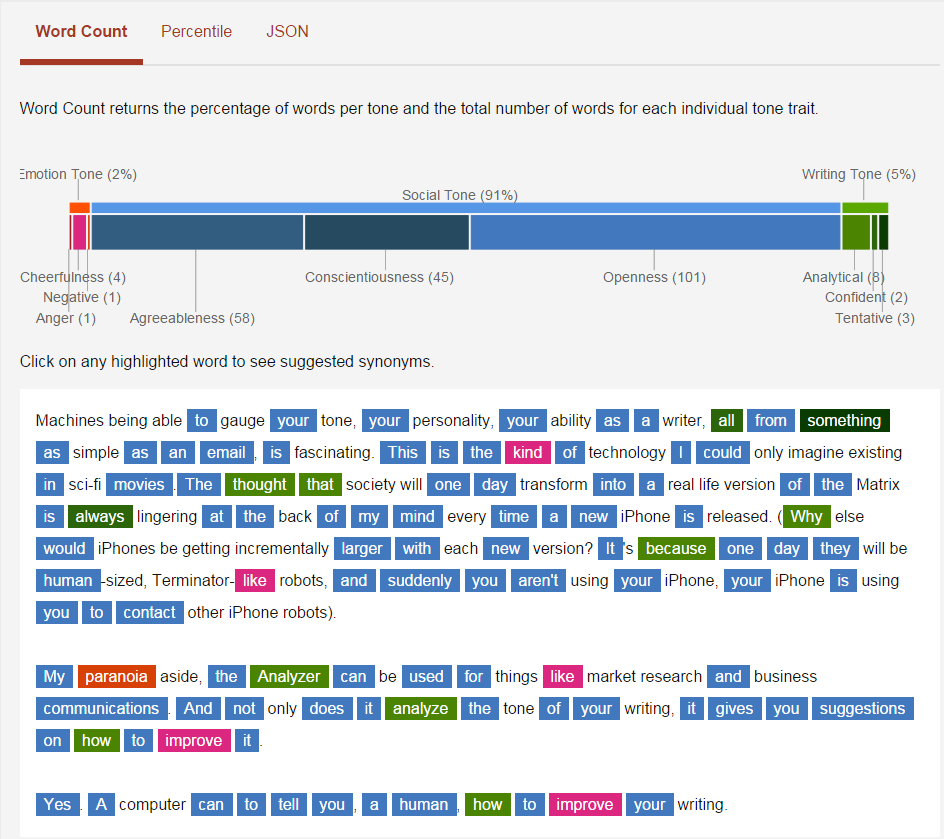 Here is the link if you want to try it yourself.